Short: Curly is turning 40 whilst we’re in Edinburgh, he’s slightly panicked about that as he believes you need to be young to be successful and so he tries to recapture his youth by looking back at his memories.

Curly: Yes, and Short essentially sabotages it for me as she feels looking back is futile.

Short: Our first gig as Short & Curly was a spoof of the gameshow The Weakest Link it was a very friendly crowd at the gig I used to run Cabarera, so the audience were very up for it.

Curly: I did a welsh accent. It was ropey.

Short: Rubber chicken, a squat and a kiss for good measure

Curly: Lucozade for me, then reciprocate the kiss.

Short: Our best review I think is from Define Arts. They totally hit the nail on the head with how she described us and what we are about.

Curly: Worst review was from Fest. We forced this audience member up on stage to do a break dance without knowing they were the reviewer. They didn’t seem to take too kindly to it. Even though the intention was to make him look good and us look like idiots.

Curly: The usual strategy is we don’t look at them unless we need to print parts to put on posters

Short: but usually by the last week I’ll have read all of them anyway.

Curly: and I’ll pretend I don’t know what she’s reading.

Short: Don’t mind them on the whole, they can really help you, as well as not.

Curly: Agreed. Please just don’t be lazy and regurgitate our press release, have an opinion!

Curly: Well, I would say firstly that the holocaust was an undeniably horrific event in history, but also that dogs don’t have hands they only have feet. So, it was probably less of a Nazi salute and more of an impression of John Cleese in response to a hugely insensitive sentence said by his owner.

Short: There are many subjects that we just won’t touch because it doesn’t suit what we do.

Curly: Yes, but I think there are laughs to be had in anything if done in the right way.

Short: We’ve certainly gone too far for an audience before. We once started a show by charging into the room with blue plastic cap guns pretending to take the room hostage.

Curly: Yeah, it was normally a high energy and fun start to the show, but it was too much for one audience member who instantly ran out of the room leaving their belongings and daughter. It was hugely awkward, distracting and confused us so much that it made the whole show really weird.

Short: She came back at the end to get all her stuff, and daughter, and confessed she had been taken hostage before so had to get out.

Short: I’m not sure what the best gig we’ve ever had is. However, one of the most memorable was doing Sketch Theives in 2016. Sketch Thieves is a show where you perform a sketch then, swap sketches with another act and recreate them. We got paired with The Beta Males.

Curly: Yeah, they thought that they’d stitched us up because during their sketch one of their members stripped naked backstage before coming on, but what they hadn’t factored into proceedings was maths.

Short: There are three of them, and there’s only two of us. So, we played out being the two non-naked people in their sketch and then forced this persistent heckler in the audience to be the naked guy. Which the audience loved!

Find Short & Curly on the web - 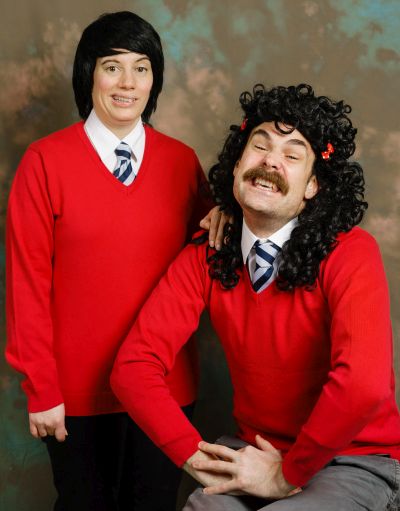 Find Short & Curly on the web -

We forced this audience member up on stage to do a break dance without knowing they were the reviewer. They didn’t seem to take too kindly to it. Even though the intention was to make him look good and us look like idiots.