It is a grotesque and surreal tale of a fictional northern shithole putting in a bid to be City of Culture. Are there any tiny magical creatures in it? Yes. As well as ill-advised musical numbers and if they make it through previews, some pretty dark jokes. It’s a gag-packed spectacle and it’s really fun to perform. (NB: We are writing this in June.)

Our first gig as a duo was in Manchester. We’d both recently moved there and decided to run a little alternative night called The Delightful Sausage which we would compere together. Chris wore a sausage costume that night and it really made him look like a turd. And since then it has been Amy’s turn and Chris wears his finest, River Island, skinny-fit shirts.

Do you have any rituals before going on stage?
Chris does a press up and looks around for applause. Amy bites the head of a bat. Which is a euphemism we are trying to coin for pushing out a bit of poo before its time.

We were described as “The best advert for modern British comedy you could ever wish to see” and our stiffies really did touch the sky that day. The worst we’ve seen was a Facebook status from a very drunk, very old school comedian, who (later apologised for having) talked through the entire show. We bought a spell book from The Works and have been steadfastly trying to turn them into a pain au chocolat ever since.

We’d love to say we won’t. But we will. Over and over again. We’re pretty thin-skinned as it goes and we take almost everything to heart. The Edinburgh festival is an absolute treat for us as, as you’d imagine.

We don’t want to be reminded of this. It makes our teeth itch. We’re still very much in shock that he has a girlfriend.

In our opinion no subjects are themselves unsuitable, but it is the classic thing of whether the joke punches up, or down. The thing that boils our piss into a thick syrup is when a comic says something akin to, “I was too edgy for them.” When they’ve just performed a horrific set to silence because the audience does not find their gross views funny. Thick, thick syrup.

Leeds 2017. My, oh my. We were doing the opening set of a lovely comedy night and really learned the lesson that an audience will not necessarily assume you’re writing involves irony if they don’t know you. Our set was exclusively about how great white men are.

Looking back over your time as comedians, tell me about the best gig of your career.

The last night of our Soho run was incredible. The room was packed, and our two sets of parents sat on the front row, looking as proud as they were confused. It was the best. Amy cried before the show and Chris cried during. Which has never happened (from joy) before.

Find Delightful Sausage on the web - 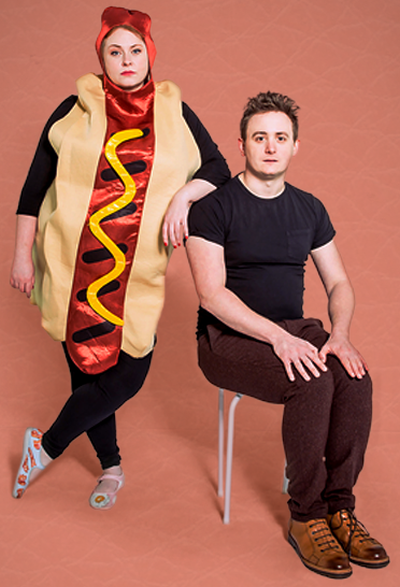 Find Delightful Sausage on the web -

We were described as “The best advert for modern British comedy you could ever wish to see” and our stiffies really did touch the sky that day. The worst we’ve seen was a Facebook status from a very drunk, very old school comedian, who (later apologised for having) talked through the entire show