I aim to take another woman’s happy ending – “I’m engaged!!!!” – as the start of a story that tracks the misery of compromise, and weighs the value of the ticket price of a lifetime of companionship. In other words: not marriage as a happy ending, but rather what it looks like once a woman is several years in.

It was at The King’s Head in Crouch End in July of 2014. I tried a few jokes about being American which barely hung together, then did a bit of crowd work that came off as too aggressive. A story about a man who danced at me as part of some poorly performed foreplay eventually got a laugh, and the larger point is that, with the stuff I did wrong, I knew why it was wrong, and was chomping at the bit to get it right. I booked a second gig for the following night.

I remind myself of what it is I want to work on in the set – this bit of pacing, that particular line, etc. – then I tell myself a series of self-aggrandizing lies about my talent level in an attempt to up my confidence, which, in its most natural state, is not so high.

I’ve never been reviewed as a stand-up, as I’m new to the game, and have so far avoided the bulk of competitions. As a writer – I was a writer in my former life – my worst review said, in effect, “Meh. I see no growth from what she’s done before”.

As for the best review, I was in L.A. on a very small, very non-glam book tour. I was staying at a friend’s flat in the Hollywood Hills, and drinking morning coffee under an orange tree, when I opened the L.A. Times and saw my name and book title, and read some lovely things about myself.

I have since given birth to a child, and I’ve heard this child laugh for the first time, and I’m telling you: that morning in L.A. was just as nice.

I think that, yes: Meechan did commit a criminal offense. But let me work through how I got there:

I believe that hate speech should be illegal. BUT:

I don’t think that a wretchedly offensive and misguided attempt at comedy should be illegal. It should result in a damaged career, but not fines or jail time. BUT:

Meechan turned out to be part of the alt right, if I’m remembering correctly, and that feels like the crux of it all. Because then it’s not a horrendous attempt comedy that should nevertheless be defended under the umbrella of Free Speech. Then it is simply someone who supports an openly anti-Semitic group, who’s made a video that says “Gas the Jews” off the back end of a Nazi salute, and that seems to me like hate speech. A pug’s involvement doesn’t change that.

Are there any bad subjects in comedy?

The closest I came was years ago at an open mic night when, for one reason or another, I started railing on the relationships of older more successful men with younger less successful women. There was no “bit”, as it were, it was just me doing an unartful rant. What makes me cringe about it now is not the rant, actually, but how unoriginal a point it was to rant about. It’s like, “Oh my god! Older men and younger women! She’s saying something DEEP! SOMEONE PLEASE ALERT THE PRESSES!”

I’m not too cool to admit that I worship at the altar of Nish Kumar, and I gigged with him recently, and the stars aligned and I had a good night of it, and he complemented by writing afterward, and the whole thing was as good as that morning at my friend’s flat in L.A. Which, to remind you, was superior to hearing my child laugh for the first time.

Find Sara Barron on the web - 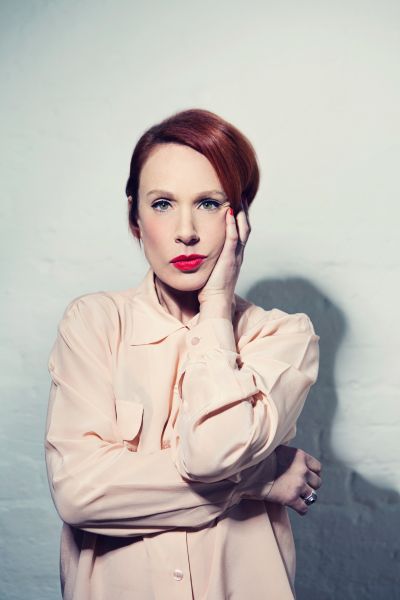 Find Sara Barron on the web -

I was in L.A. on a very small, very non-glam book tour. I was staying at a friend’s flat in the Hollywood Hills, and drinking morning coffee under an orange tree, when I opened the L.A. Times and saw my name and book title, and read some lovely things about myself.

I have since given birth to a child, and I’ve heard this child laugh for the first time, and I’m telling you: that morning in L.A. was just as nice.