‘Back in the Closet’ is a despicable new one man show which I wrote over the Holidays last year in 2017 and began previewing shortly after this past winter in Los Angeles. It is the creamiest and most personal and outrageous layers of my stand-up material which I’ve been touring the US with over the past year and a half- and so is certainly a comedy- but with this show I wanted to present that material more theatrically (and with more of a story line) than a typical stand up show.

Much of it covers my obsession with straight men with hot Viking face, love, dating, penises, the cosmos, friendships with figure skating Olympians, and prime rib. It is very much a hedonistic celebration of life while simultaneously a take-down of modern culture and (at least my own) sexuality. I sit at the piano twice for some comedic relief during the show, get fairly physical and absurd at moments, and as it unravels I really try to bend the laws of physics and the very fabric of time-space… and invite the audience to take a hilarious-yet at times poignant- roller coaster ride through my pleasurable monstrosity.

My first comedy gig was at an open mic in Los Angeles above a Chinese restaurant dining room. I was petrified to try stand-up, I didn’t know anyone there… it was finally my turn to go up at the very very end of the 3 hour night- and I went up and did my entire set to complete pin-drop silence. I kept watching the back of the room, where all of the people were hiding in the shadows, and couldn’t get even a single one of them to laugh once the entire 6 minutes.

As I was leaving, I noticed that those weren’t people. They were large potted indoor trees that looked like people in the dark against the back wall… and that the room had been entirely empty throughout my entire ‘set’.

I don’t really like to drink before shows, but I do get as stoned on marijuana as possible. Then I repeat ‘sperm, sperm, sperm, sperm’ to myself in a quiet whisper (as many times as I want, however many times it takes, as long as it’s in even numbers), and once I have completely transcended, I lace up my skates and step out onto the ice…

‘He’s skating on thin ice.’ from the New York Daily News was the perfect review… edgy, dangerous, and surgically on point.

‘You must fix your show so that it appeals to intelligent people, and not degenerates’ from my father was probably the worst (and also again, the best). Oh those Russian Jewish parents….

Oh yes, I’ll be up in bed late every night rubbing coconut oil all over my hairy body by candlelight, and reading review… after review after….. review.

Reviewers are like regular people. They enjoy long walks by the beach, and delicious meals, and shade on a hot day. Some are probably difficult monsters, although I’ve never met any of those. Also, I’m delighted by people who choose to engage with (and even write about) the arts. So please… yes, send the attractive straight ones my way… I’m totally available!! Thanks for asking.

I do think freedom of speech is important, especially in comedy ….but I also think that intent is everything. Teaching a dog a ‘questionable’ gesture should be accepted and allowed comedically, if it’s done in the spirit of diffusing or healing old pain, or mocking a difficult point in history and taking some of its power away (one of the many great benefits of laughter and comedy).

BUT- if that act is delivered with the intent of actually spreading hatred or encouraging backwards behaviour (or thought) in any real way, then I believe it NEEDS to be moderated by society (the correct part of society) somehow.

Maybe he should not have a criminal record, but I do think that his public platform should be dismantled.

But then again, I think the current US president should have his twitter account ripped from his clutches and put down like a rabid animal because of all the hatred that he is spewing through it… so maybe that’s just me.

It really is a tough line to determine… freedom for all to express vs. controlling the growth of pure evil. Ooof.

I personally have very little shame regarding  subject matter for material in general, so as long as something is hysterical and fits the show I feel that it’s fair game! My show is pretty unapologetic and totally inappropriate 😉

I really don’t believe any subject is automatically off the table, especially in regards to comedy… and ALL things in life can be healed (or at least alleviated) through laughter… so as long as it’s coming from a place of joy and shared insight, bring it on!

The best gig of my career was at a large comedy club in Michigan. I can’t say why (specific to the performance or to the material), but whatever I did up there caused a very hot local firefighter who came to the show to ‘open up’, and agree to let me to take him back to my hotel room after the show. So yeah, obviously that was the best gig of my career because whatever spell I had cast upon that savage beast of a male hero on stage that night led to my wildest fantasy coming true in a tiny motel room on a cold rainy night. I need to learn how to do that more consistently. More firemen, more men in uniform in my hotel rooms after shows. Please.

Find Roman Fraden on the web - 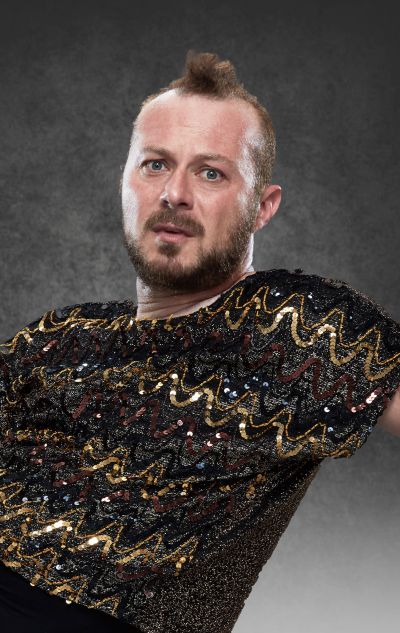 Find Roman Fraden on the web -

‘He’s skating on thin ice.’ from the New York Daily News was the perfect review… edgy, dangerous, and surgically on point.

‘You must fix your show so that it appeals to intelligent people, and not degenerates’ from my father was probably the worst (and also again, the best). Oh those Russian Jewish parents….