This is my first Edinburgh show, its called Lucky Bastard and unsuprisingly its about luck. Good Luck, Bad Luck and the level of control you can have over them. To enjoy the little things in life and appreciate when things going well. And when times are hard whatever happens don’t tell hope to fuck off.

My first gig was an improv show at university. At the time I thought I was going to be a serious actor. I had friends in the improv group and they bullied me into a show. I was terrifed, but I remember getting my first laugh and I’ve never looked back.

Coming from improv, I sometimes do a little word throw with myself to get the juices flowing. I know I should do a warm up before everyshow as it makes me better every time I do, but sometime ya get lazy. One goal for me this fringe is to warm up every time.

I’ve never been offically reviewed for stand up which is part of the reason I’m here, I want to know how people see me. The closest I’ve got is I was doing the Comedy Store Gong Show and it had been a brutal night. I was about 9th on and no one had lasted more than a minute. I managed to get to the full five and Ian Stone the host of the night said ‘The comedy’s started’. Could I put that on a poster? As for bad reviews, my wife six month in to doing stand up said ‘honey, I don’t think this is for you’.

Yeah I’m a big boy I think I’ll learn more about how to make my show better by reading as many opinions as possible.

I think that they are as important as you make them. It’s all about perspective, if you think a reviewer is the be all and end all of your career, than your going to have some strong feelings. If you think its just someone’s opinion and they don’t speak with the voice of god, than is just like chatting with any audience member after the show.

No that is no criminal offence. A pug is a small, malformed dog with breathing problems and silly face. Having such a creature impersonate either Hitler or a Nazi in general is mockery of what they believe. It would be like getting your dog to play dead when you shout ‘Death to America’. I doubt any Nazis were emboldened to want to do more harm to Jews after seen a pug Sieg Heil, if anything I think it would have pissed them off. And any day you piss off a Nazi is a good day.

Ones that you can not personally make funny. And if people sense that the intent of the joke comes from a place of hate or bigotry they are unlikely to laugh.

The trouble with going too far is everyone has a different line. Offence is taken not given. I once had a pint glass thrown at my head whilst on stage. To this day I have no idea what I said to cause this reaction. I did a joke about Harvey Weinstein once, and a woman came up to me afterwards and said ‘I don’t think its your place to being make jokes about Weinstein’. So I have gone too far for some people, but not yet for myself.

I was booked to do a gig in Vienna. It was my first time giging outside England. They had paid for my flights, put me up in a hotel, it was awesome, but terrifying. I had no idea what I was in for with the gig. The promoter had told me other people had struggled by going to fast and I needed to really slow everything down if I wanted to get any laughs. The gig was in an old, 300-seater rock club with an elevated stage. As the room began to fill, I got more and more nervous, I didn’t hear anyone speaking English to eachother. I was meant to do 20-25… I stepped on stage and came of 35 minutes later. It was fantastic, by slowing down, it allowed me to take everything in, react to the room and think clearly about how long to leave a pause, what bit should come next. Felt like pure MAGIC!!!

Find Sam Russell on the web - 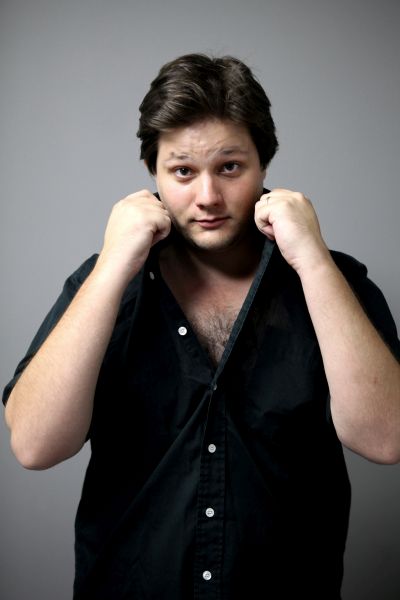 Find Sam Russell on the web -

It’s all about perspective, if you think a reviewer is the be all and end all of your career, than your going to have some strong feelings. If you think its just someone’s opinion and they don’t speak with the voice of god, than is just like chatting with any audience member after the show.