My show’s called ‘Work’ and is about work. My last show was called ‘Melancholy Poontang’ and had lots of silly characters like Detective Inspector Horse hand who was victim of the failed Scottish super-soldier programme and had a horse for a hand and a drinking problem (couldn’t open Capri Sun) but it was actually about toxic masculinity. Seriously. But no one got this, because I refused to explain this because I’m an idiot. So now I’ve got the subtext, dragged it out of the sub, chucked it in the text. I’m known for ‘weird stuff’ and thought it’d be fun to challenge myself with this show, both in terms of subject matter (the philosophy of work, serious, important) and delivery (no costumes, no sound cues, no ritualistic killings). The received wisdom is write what you know, write what you love, and I know and love Marxist political philosophy and Witcher 3: Game of the Year edition. I figure Marxism’s more profitable. I also have the privilege of MCing the AAA Stand-Up showcase at Underbelly at 18.20 every night, which means my Fringe breakdown’s either going to come twice as fast or I’ll have two. Excited to find out!

Because I am an idiot, my first gig was ‘King Gong’ at the Manchester Comedy Store. For the blissfully ignorant, gong shows are gigs where drunk, hostile audiences have the power to ‘gong’ you off stage if you fail to tell their favourite transphobic gags with sufficient arrogance. They book forty acts because they know 90% won’t get even half way to the coveted five minute mark. I went on with some half-baked, mediocre whimsy about the politics of Afghanistan and hit the one one minute mark before being liberated by the crowd who, whilst drunk and hostile, were right to punish my hubris. Please, for the sake of the comedy circuit and your own mental health, do not start comedy at gong shows.

About an hour before call time, I ignite a tiny wicker man fully of ants in it in honour of Paimon, second King of hell and patron of the arts. Also, if I’m not nervous, I make myself nervous. Pace about, drink caffeine, imagine what my Dad would think if I was rubbish. Need the adrenaline. If you’ve not got the fear out there, you’ll die. And disappoint both Dad and Paimon.

My best review made me feel like a handsome young prince, frolicking through the meadow on a spring day; the peasants, my handsome knights, even the little birds, cheering on their future king. My worst review made me feel like the same prince, but it is France in 1789 and the door is not going to hold any longer and I’ve ran out of poison. Artists can only ever ascertain the value of anything we create, and an audience’s response to it, by reading the words of a reviewer. Oh, to romp once more amidst the fresh blooms.

If we’re judging an entire profession, they’re well above assassins and debt collectors but nowhere near nurses or cleaners. Every one I’ve met in person has been sound.

I think Count Dankula should be sent to the electric chair for making up his own nickname. Free speech universalists rarely acknowledge the difference between censorship – which is state repression and bad – other methods of shutting bigotry down, like no-platforming, shushing or dunking on people online. The latter’s not censorship, it’s just more free speech. Censorship is bad, and the court buying the prosecution’s idea that ‘context and intent are irrelevant’ when determining the nature of jokes, even godawful ones I hate, is bad. Given the Count’s granting of his first interview to Our Brave Boy Tommy Robinson – and later comparing Robinson’s imprisonment to the suffering of black Americans under Jim Crow – Dankula is evidently crypto-fash and should, in the name of free speech, be ruthlessly cyberbullied. Oh, and as a good commie, I’ve got to say the obsession with free speech, this idea that politics just float about in a marketplace of ideas, untouched by our mortal lives and material relations, is bourgeois af (Marxist for ‘bad’). It’s all about hegemony. Don’t let the fash get it.

No. You can however handle a subject very badly. Or you can say something that’s totally inappropriate for a particular audience. I did a preview of my show in a very Tory place and they did not like my bit about landlords being parasites because, it turned out, half of them were landlords.

In comedy? No, because I am a coward. In life? Also no. On the M6? Yes. Pay attention to junctions.

Depends how you define ‘best’. There’s a group of Glasgow based comics who have a night called ‘Chunks’ where the only rule is you can’t do stand up. The atmosphere at those gigs is great. Last time I was at the Fringe they did a few shows and let me do a character called Bin Man where I covered myself in bin bags and yelled about living in a landfill. I was too warm and I don’t really remember it but I’ll never do anything better.

Find Jack Evans on the web - 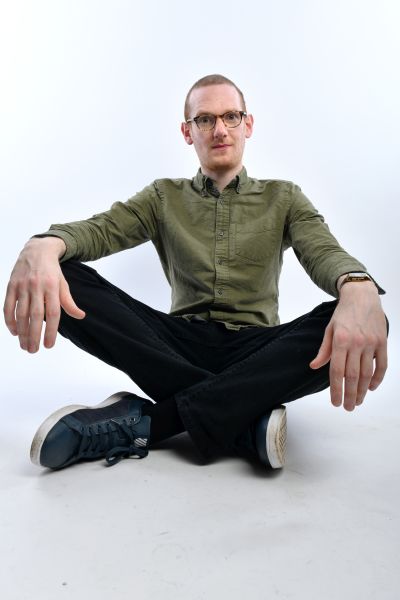 Find Jack Evans on the web -