I had to take some time away from comedy to look after my mum and The Sea is Big Enough To Take it is a show about our relationship and that time.

It’s about what’s it was like to have had a vociferous feminist, ideological and very loving mum. It’s the story of going to the seaside with my family, and my mum screaming at the sea and challenging me to ‘do more politically’. My mum was part of a generation who thought they could change the world – and did. She also had a solid public-sector job for most of her life – where as I’m a performer working in the gig economy and I have done some pretty extreme things to make a living – including racing pigs, sending someone to space and commentating on people as they get electrocuted in the face and balls on obstacle courses. So, it’s about those generational tensions, and how to make money and keep your integrity. It’s a story telling show with some fun games thrown in, and……..partial nudity. I’ve also just discovered that the venue I’m performing in (the BlundaBus) is 6ft high and I’m 6ft 2, so the show is fast becoming about back pain.

It was an improvised comedy gig at University, I pretended to be a turtle, it was awful.

“Stands out in too tight, too small trousers’ was a nice score settler for me at the Edinburgh fringe 2011, as I’d told the producer that my trousers were too small right from the start from the start of the run. I once did a show with a Tudor prog rock band at the Barbican, and a reviewer described the show as ‘out of date for the 16th century’ and to be honest it was shit. The Metro have described me as a ‘joy to watch’, my Dad however has only seen me perform once and all he said was ‘there’s still time Robin’.

I plan to write my reviews out in blood in massive letters on my bedroom wall.

Credible experienced reviewers are a god send, I think most comedians just want a fair review from someone who knows what they’re talking about and is easily blackmailable.   But yes, there is a time and a place for feedback.

Whether or not something is legal is a technical question for lawyers to argue over, and how to train a dog to do that is a question for Crufts, but do I think what he did was morally wrong? Yes, and he should be held to account for that. The dog I think should not be punished.

It’s not so much a question of subject as permission. If you’re the victim of something or have experienced trauma then I think it is your choice if you want to discuss that, and that can be empowering and progressive. If you’re ridiculing the victimised, then I think that is a problem. It’s a question of who’s your target? And is it your story to tell?

At Secret Garden Party (a music festival) I made 8,000 people have a powder paint fight which looked amazing. I have also hosted the Shoreditch Paw Pageant, a fashion show for dogs, and hosted a gameshow in which the winner was immediately catapulted into the sky on a giant reverse bungee, which was exhilarating for all involved.

Find Robin Clyfan on the web - 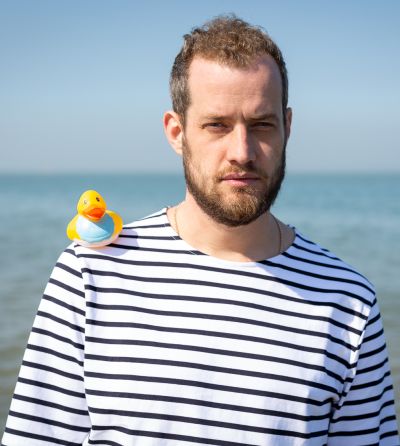 Find Robin Clyfan on the web -

The Metro have described me as a ‘joy to watch’, my Dad however has only seen me perform once and all he said was ‘there’s still time Robin’.