A fun stand-up show where  I invite you to my life of trying to date after 12 years out of the game. I was married, not in prison (insert a hack witty comment here about them being the same). I don’t understand the rules. Basically a world where Ghosting someone is the norm.

I’ve never been more nervous about anything in my life. To date it is still the most scared I’ve ever been. I did five minutes of material and was the most exhilarating experience ever. I loved every minute of it and from those first five minutes I was hooked and knew I wanted to do it again and again. Basically, the complete opposite of losing your virginity.

Just the adequate amount of self-loathing and sweating.

My first review was the worst I’ve had to date. I was so new to comedy and was doing a three-hander show in Brighton with two other comedians. A reviewer, who shall remain nameless, but it rhymes with Peve Pennett, basically destroyed me. Said I was boring and hack. In hindsight the material was but I was new and finding my feet. I really don’t know why he reviewed such a small, free show with new comics but guess it was a good learning curve.

My best review was when I headlined a compilation show, again in Brighton (I am allowed to gig elsewhere by the way, that is just a coincidence!) and was amazing. I had been going for a few years by this point and it was a late show where the crowd were so electric and I just told stories on stage about being newly single and trying to meet men and failing. The reviewer described me as ‘An astute comedic story-teller…left the room quaking with laughter’. That made it for me!

Oh Hell to the no.

They’re just doing their job really but I think they can sometimes forget that we have feelings. I know we put ourselves out there to be judged but it is hard enough doing stand-up, then writing and performing a show in Edinburgh every day and I think maybe that can be forgotten. Not all of us (me) have loads of money to pay for writers, directors and / or PR people telling us we’re fabulous, and I like to hear that I’m fabulous from someone other than my Mum.

Oh gawd that’s a tough one to answer. According to his apology he didn’t mean to offend or for it to go viral, it was just meant to mess around with his girlfriend. So, did he go too far for some people? Yes, most definitely. Would there have been people that found it funny? Possibly, yes. I don’t think it’s a criminal offence as it was clearly meant in jest, I don’t believe he was trying to promote or support anti-Semitism and therefore isn’t a hate crime but I do see why it would offend some. I personally don’t find that kind of thing funny and isn’t something I would do but being a comedian is about pushing boundaries and taking risks and am sure we are all guilty of offending someone.

That’s a tough question as it all depends on the crowd and show really and what their level of acceptance is. Overall I would say no – I think if the subjects are tackled in the right way then you should be able to talk about anything.

Sometimes as a comic you can judge the crowd wrong and think they are up for certain material they most definitely aren’t. You can get it wrong. I MC’d a gig once and asked the usual questions to a woman (name / job / kids etc) and she lost it. Said I was asking ‘way too personal questions’. So I asked her what her cup size was after that as thought it would be funny to actually ask her a personal question for funsies. She walked out. Whoops….

It was all very last-minute. I was supposed to be going on a date on Valentine’ day and the guy ghosted / stood me up that evening. So I went to hang out at a gig with one of best mates (also a comedian) and she got a call from a massive London club looking for an MC. She couldn’t do it as was gigging already so she recommended me. I went to do it and it was a ruddy delight. Huge crowd all up for it – the energy was electric. Told them that I had been stood up and a guy in the front row said we should record a message for him. So I recorded 150 people yelling ‘DICK!!!!’ down my phone and I sent it to him. So…. just your average evening really.

Find Sarah Iles on the web - 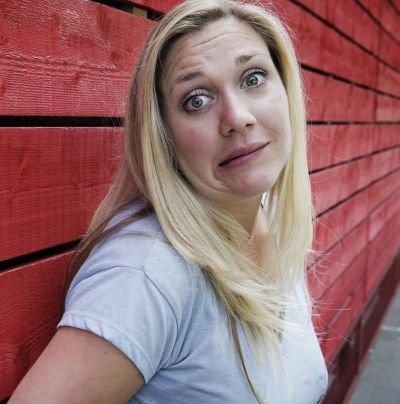 Find Sarah Iles on the web -

My first review was the worst I’ve had to date. I was so new to comedy and was doing a three-hander show in Brighton with two other comedians. A reviewer, who shall remain nameless, but it rhymes with Peve Pennett, basically destroyed me.