It’s a loud, fast, comedy party show where the audience puts our brains and bodies to the test with high octane improv games. No two shows are the same!

None of us had ever performed improv before so it was terrifying, there were about 10 of us on stage so we hardly got to do anything but it felt much safer that way. The room was packed with our friends though so they gave us an easy ride.

A series of games including Two Penises (actual penis involvement minimal), telling each other “don’t be shit” and hitting each other whilst saying “got your back”

Well we had one that covered both. It was really lovely about the show saying all the things you’d want to hear. The review said that we worked well together, we handled the audience brilliantly and it was very funny however the whole thing was spoilt by the extremely loud, aggressive music that blasted as you came in. Chris was in charge that night, which was a mistake as he has tinnitus.

With both hands and always appropriately.

It’s an interesting fact and may surprise you to learn that none of BattleActs are trained legal professionals so are unclear as to the minutiae of what may or may not constitute a crime here. However he may have broken the unwritten law of not being a complete and utter piece of gutterspunk, so for that we’d quite happily throw the book at him.

No but there are definitely subjects that are better left to comedians who are able to deal with them in an interesting and insightful way. That’s the real big kid stuff innit, not just knowing that you can say anything you want but making a great decision on whether you should.

The studio at Camden Roundhouse had us a few years ago, we had fantastic audience suggestions and the whole crowd just seemed absolutely ecstatic with everything we did. It ended with people on their feet screaming “LOOK AT THAT” as Phil stood still pretending to be a pearl. Utter madness.

BattleActs! was talking to Wrigley Worm.

Find BattleActs! on the web - 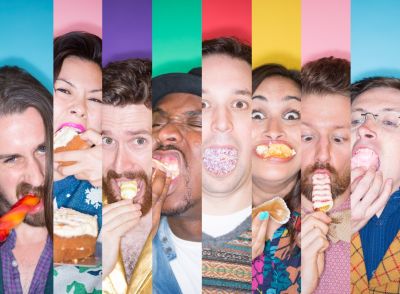 Find BattleActs! on the web -

The review said that we worked well together, we handled the audience brilliantly and it was very funny however the whole thing was spoilt by the extremely loud, aggressive music that blasted as you came in. Chris was in charge that night, which was a mistake as he has tinnitus.