Sugarcoating is a show about body, politics and body politics, about the impossible tension between insisting to maintain identity and dignity at whatever body shape you are, and reading the warning signs on the wall before you mess your body up irreversibly. And all this while remaining non-preachy! Good luck with that!

My first real gig (forgetting about the lovely Comedy School showcase) was at the Lions Den which back than was at Cross Kings near Kings Cross. I’ve put 3 quid in Ty Atkins’s hat and went in with the two friends from my course who dragged me there in the first place, but got cold feet and said they’d “just watch”. The room was hostile and hot, full of regulars and in-jokes and a seedy atmosphere. When my turn came there was hardly anybody left, still I managed to spectacularly die on my arse. Only god knows how I fathomed the energy to do second gig, but that second gig, even though I don’t even remember where it was let alone what happened there – kept me in. And even though I’ve never set foot at the Lion’s Den again, I always felt grateful to it Tim Rendle – may he rest in peace, but with the odd Sweet Steve joke on occasion – for that first chance to make a complete idiot out of myself.

No but it is helpful if I remember to breath, to check the room out a bit and to decide how to land my first sentence.

The worse was Steve Bennet’s review of a preview of Frenemies, an Israeli Iranian show I did with Peyvand Khorsandi in 2012. We had our first preview at the Frontline club, a posh foreign correspondents club near Paddington. I suspect the tension between the lavish setting and the state of the show had upset Steve and he laid into us, and particularly into me, with all the venom he traditionally reserves for the new and unsuccessful. The one phrase that remains in my head is “brusque”. I had to google it. In retrospect I think he identified correctly many shortcomings in my performance and writing, his style of breaking those unpleasant truths notwithstanding. Unfortunately he never gave me a chance to make a correction and never came to see a show of mine again.

As for best- there are “poster best” with the longest star belt and there are those reviews that regardless or stars, you feel had really “gotten” you. I will never forget Jenny Ajderian’s 4 star review of AKA MissD in Broadway Baby (2014) http://broadwaybaby.com/shows/aka-missd/700576

Bunbury Magazine’s 5 start review of Something To Declare https://bunburymagazine.com/2015/08/19/daphna-baram-something-to-declare/

But I also loved, and learned from, two very enthusiastic 3 star reviews. The List’s review of Something To Declare https://edinburghfestival.list.co.uk/article/73833-daphna-baram-something-to-declare/

and Views From The Gods’s review of Begging To Differ https://viewsfromthegods.co.uk/begging-to-differ.shtml

No matter what I would say, or decide, or vow, or be advised by other people – I will read my reviews in Edinburgh. And I will rejoice if they are good and would be upset if they are not. I’ve not come to this world to let life not touch me. I’m a scraper.

I think there are all sorts of reviewers. I do not think all of them are frustrated comedians. I wrote reviews myself in my time, of books, television shows, theatre and restaurants. I think most reviewers love the art and believe they serve the readers. But more importantly, my ideological believe as a journalist is that anybody who has an opinion on your show has the right to make it public, and you have the right to think he is a cunt. This is how freedom of speech works. It hurts, and it has an economic price, but we are yet to come up with a better way than to take it on the chin and move on.

I thought the whole story was ridiculous. There are unfortunately too many people out there calling to gas the Jews, or the Muslims, or women who breastfeed, or those who don’t. I don’t give a toss about this chap or his dog. That said, if I hear some Jew slapped him on the face, I wouldn’t be declaring a day of self-righteousness and mourning.

No. But there is comedy that I find abhorrent because of the way a subject is treated rather than the subject itself. In such cases, the right of people to point out that it is shit is just as much freedom of expression as the right to perform said shit.

I’m pretty sure for many people I go too far every day. Ay my best I have the gift of being able to phrase and deliver poignant lines elegantly. My too far is normally when something in the delivery fails me, and what was supposed to sound crisply strong comes out as crass. That said one of my best friends, a comedian I have immense respect for, thinks my closing line is absolutely inappropriate. She might be right, but I’m keeping it if it kills me: “I promised to keep my set here short and tight, and I’m a woman of my word. I’m a Jewish woman, I’ve never given birth – It doesn’t get any tighter than that”.

Whatever gig I mention I will remember at some point that maybe there was an even better one, but I really enjoyed a September 2015 post-view of Something to Declare at the Museum of Comedy with 80n people in including my mother and aunt, which was a warm loving and celebratory riot. And a charity gig for Medical Aid Palestine at the Red Gallery in Shoreditch with Alexei Sayle MCing and Jeremy Hardy closing in front of 400 people. I was shitting myself, but it was fabulous.

Speaking of which – this is selling by the minute and would probably be sold out soon but I’m grateful as hell to Frankie Boyle who agreed to headline ICAHD UK’s fundraiser show Laughing For Palestine on 13 Aug 4:15 at the Counting House alongside Jen Brister, Craig Campbell and me as MC. https://tickets.edfringe.com/whats-on/laughing-for-palestine-with-frankie-boyle

We are raising money for a Palestinian community centre in the Jordan valley. Please buy a brick, or 100: https://icahd.org/buy-a-brick/

Find Daphna Baram on the web - 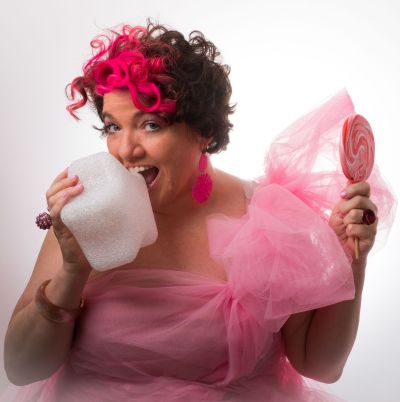 Find Daphna Baram on the web -

No matter what I would say, or decide, or vow, or be advised by other people – I will read my reviews in Edinburgh. And I will rejoice if they are good and would be upset if they are not. I’ve not come to this world to let life not touch me. I’m a scraper.