Every year I write a brand-new show and this year it’s called #Goals. It’s about aspirations and how some young people look at being on ‘Love Island’ as an aspirational achievement, whereas you could just marry someone better than yourself to make you a better person. I look at the real-life ups and downs of this.

My first gig was a 5-minute open spot, which ended up with me still being on stage after 7 mins and being flashed at to come off! To be honest it felt like I had only been on stage for 30 seconds. And it still always feels like that cos it’s so much fun!

Luckily, I never have time to read reviews during the festival! I’m too busy running around doing shows or reading over my notes for my show to be reading the papers and reviews. I wish I had that sort of time and luxury!

But my publicist Johanna Martin is brilliant, she will send me snippets of reviews, usually just the stars and a quote of the review to use. I can tell if it’s a good or bad review if she doesn’t include the stars with the quote, then I can guess the reviewer wasn’t that keen on the overall show. Luckily (touch wood) the reviews so far have all been decent. The only time I saw a bad one it said “he comes on stage almost with the words “please like me” scribbled all over his face” which might be true cos I can’t think of a time I would walk on stage not wanting the audience to like me!

I wish I had the time to. I used to go up to Edinburgh with about 4 books to read over the month. I never read a single page of any of them! Every year I still take a book up with me, thinking I’ll have time during the day to read. That time has never come and so far no books have ever been read during my Edinburgh fringe run.

I don’t mind reviewers at all. I’ve met loads of reviewers up at the festival and nearly all of them have been nice pleasant people to chat to!

I’m not a judge, criminal lawyer or police officer. My job is to entertain people, which I do in my way, which is none offensive, light hearted entertainment. I could never speak or judge the action of other comedians, I could only ever explain why I do or say certain things on stage. I would never want to cause any offence to anyone myself. Comedy is about bringing people together, not segregating. It’s about building bridges between communities not putting up walls.

Anything can be made funny. But to make that topic funny, no matter how dark it is, you need to be from that experience or that background. I talk about Irish/ Iranian experiences and immigration because I’m an Irish Iranian immigrant from Iran. I don’t talk about being an immigrant from Sweden because I don’t know what it’s like coming from Sweden. So yes, you can talk about anything you like, but if you want people to be relaxed and laugh along with you, talk about the experiences you know. That’s normally a helpful rule.

There are no clear rules or secrets to great comedy, but one thing for certain is that you’re only as good as your next gig. I’ve been lucky enough to play some lovely big venues like the Edinburgh Playhouse and the Hammersmith Apollo, amazing venues full of thousands of people. It’s been great, but I’ve also played small venues and they have been some of the best and most memorable nights of all. When you can see every face in the audience laughing and smiling back at you, that’s when you know you’ve done a great job and the audience goes home happy. Many people work in jobs where people buy their products, their clothes, use their apps or appliances that make their lives easier. My job is to make everyone’s life happier. And when they’re happy, I’m buzzing!

Find Patrick Monahan on the web - 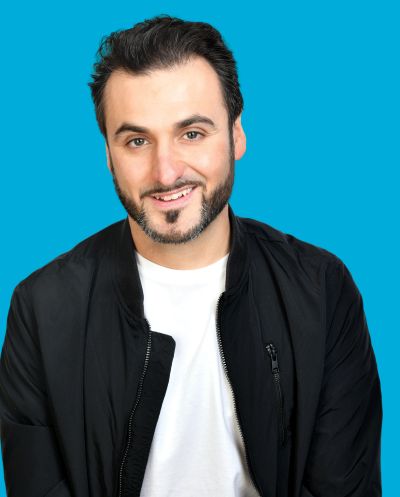 Find Patrick Monahan on the web -

I don’t mind reviewers at all. I’ve met loads of reviewers up at the festival and nearly all of them have been nice pleasant people to chat to!