The show is all about a big decision I made last year, to quit a career to be a professional comedian. People often say it’s brave to do stand-up comedy. This year has taught me that it’s actually braver to let someone you love do comedy. Also, it’s only when you change your life in a big way that you discover who you are. I realised that I don’t cope with change well and a lot of these traits and anxieties are dealt with in this show. It’s a story about sacrifice and following your dreams at a later stage in your life when society deems you should be settling down, and trying to balance that with the responsibilities you have.

I started stand up in 2009. My first gig was a gong show for Funhouse Comedy (again above a pub) in the middle of Nottingham. The gong show is the closest comedy gets to the roman tradition of throwing Christians to the lions. Although in this case the Christians are comedians and the lions are audience members called Nigel who work in accounts. Nigel and his party were handed glow sticks, red and green, and could dismiss an act they didn’t like after two minutes by holding up the red one. It was brutal, but it’s one of the only ways you can get stage time in the early days. I did my first five minutes of material. I can’t remember much about the set, other than there was a joke about Tricolore French Text books and a Yorkshire version of Back to the Future; I wasn’t going for the easy laughs. There was about twenty people in, including my wife Jemma. I somehow managed to win the competition and that was the start of the journey. I often think if I’d have died horrendously (which I often did following that gig) I may not have had the confidence to continue.

Nothing really, unless you count the thunderous expulsion of most of my body weight through my own exit chute! I also take sage tablets. This is a bit of an epidemic within a small community of comics. If you take one half and hour before stage time it’s meant to make you feel sharper and alert. I’m not sure it’s true but it’s preferable to an energy drink, which never used to kick in until I got home. Then I’d spend most of the night angrily eating my own pillow. I don’t think sage is addictive. In terms of side effects it does cause flatulence, but they smell like your Grans roast dinner so it’s not a problem. The reality is though, like most drugs, there is only one way to get off sage and that’s cold turkey.

Best review was a Chortle review of my debut show in 2015. The line “superb character creations, reminiscent of Les Dawson” was the one that made me so happy. Even though I’m just doing straight stand up, I really try and give the material depth by painting detailed pictures in every routine, so for that to be acknowledged and to be compared to a comedy hero, was wonderful.

The worst review was from the List for the exact same show. All the usual boxes were ticked, the phrase “clubby” was trotted out once again. During the fringe that term does tend to get levelled at many Northern acts, who have had the gall (how dare they!) to take a show to the Edinburgh Fringe. “Club Comic” is often used in a derogatory way to pigeon hole an entire section of the circuit as being either derivative or unintelligent. Some of the best stand-up comedians – Seinfeld, Harry Hill, Ross Noble, Daniel Kitson and many others – all cut their teeth in Jongleurs and the Comedy Store. In the same review (which didn’t bother me in the slightest, I’m completely over it, honestly) the reviewer said “there was even a routine about going to the swimming baths” I still don’t know what they meant by that. Seinfeld does routines about flying on a plane; it’s just observational comedy. Imagine watching comedy and not being able to just enjoy it at face value, it must be terrible.

I would say though that a lot of what was written I have taken on board. I probably did go do my first hour too early in my career, but you have to learn from these experiences. The show I’m taking up this time has some of the most challenging stuff I’ve ever written.

Not sure yet to be honest, depends how the first show goes!

I’m ambivalent, to be honest. Without us, they wouldn’t have a job so I do think we are the ones with the upper hand, although often it doesn’t feel that way, especially in Edinburgh. I suppose it depends on which reviewers you mean. There is a big difference between an established writer on comedy and the arts doing a review for a broadsheet paper and someone on a first year of a theatre degree with a copy of word and an agenda. I don’t know if the public read the reviews, I think we like to think they do but generally if you have a good show that’s the best PR you can buy.

I don’t know what offends me more, the phrases he used or the fact that he has so much time on his hands that he can train a dog to do that. If only that energy could’ve been spent training them to stop shitting in my local park then I’d be right behind him.

Seriously though, I find it difficult to comment on this; I am a white northern working-class male and have never experienced any kind of prejudice in my life, other than glimpses of classism, which is certainly not on the same scale as this. Those words are loaded with historic connotations, it perpetuates prejudice and marginalises a community. It’s not so much what he said, but the sentiment of what that sentence means. I think what he did was abhorrent and we should call out this sort of repugnant behaviour as being totally unacceptable, but whether it’s a criminal offence is open to debate.

I’m certainly not going to defend him, but if you start to criminalise things like this then you are on a sticky wicket. I suppose the line has to be drawn between saying something that’s offensive and full on hate speech. Inciting violence or harassing a community should obviously be illegal, but this was an attempt at a joke; a terrible and unfunny one about a subject that frankly shouldn’t be joked about, but I think we have to let people have the freedom to make jokes and deal with the repercussions as and when they happen. Passing laws and making it illegal will only push these views underground and make them more insidious.

No, it’s often not the subject but the approach that is offensive. There is the rule of thumb that comedy should never punch down, which I do follow, although comedy often has a target.

You haven’t got as much freedom as you think on stage. When you start comedy, you don’t realise that an audience often judges you and pigeon holes who you are. They impose limits on what they feel you can talk about on stage and what fits your persona. The skill then is to push your audience as your act evolves and educate them.

I love watching acts that push the comedy envelope, it takes great skill. Loads of newer acts try and be edgy but they have not got the experience or have not done the background reading. People like Doug Stanhope can wring comedy out of the most horrendous subject matter, but that is deceivingly difficult to do. You also can not put that sort of act on a mixed bill in a weekend club, once you go down that road of being provocative and challenging you are making a commitment to having to build your own audience.

Always, until I downloaded Waze. But in comedy terms, I’ll be honest, no. It’s not the sort of comedy I like to do. I’m still relatively new to my comedy career. I think it’s often hard enough just making strangers laugh without adding potential walk outs and screaming matches with punters into the equation.

There have been many highlights, but the one that sticks in my mind was supporting Rob Brydon at Huddersfield town hall. It was basically a home fixture in an incredible theatre, I had friends and family in the audience and I was sharing the stage with one of my comedy heroes. It was also my first gig as a professional comic as I had left the day job that week and I felt more energised and motivated on stage than ever before. What also made that gig particularly special was that I had taken along a copy of Rob’s autobiography, which my wife had bought for me back in 2009 as a good luck present for my first gig. She had got it signed by Rob too and he had wished me good luck in my stand-up career. I took that same book along to the tour show in Huddersfield and he signed the other side of the page. It was an amazing moment.

Find Scott Bennett on the web - 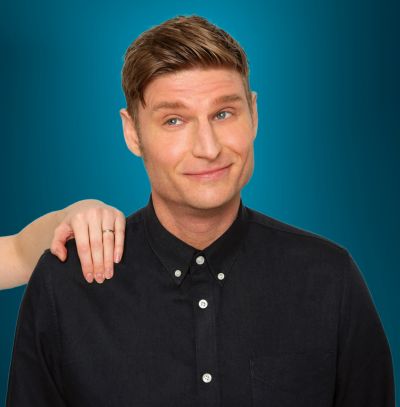 Find Scott Bennett on the web -

I don’t know if the public read the reviews, I think we like to think they do but generally if you have a good show that’s the best PR you can buy.