it’s called George-ous, it’s my debut show and I’m performing it at the Pleasance Courtyard. It’s a musical satire about toxic masculinity presented through the prism of a man who insists that he’s a massive player when it’s evident his life is actually falling apart. Or, to put it simply, its me insulting the audience for an hour with a guitar. it’s a lot funnier than it sounds.

It was a So You Think You’re funny? heat in Bristol in 2013. I’d never performed any comedy before and was blissfully unaware of the existence of any open mic nights so very much jumped in at the deep end. My first set consisted almost entirely of me reading passages from 50 shades of grey in the voice of Alan Partridge. That was it. Shockingly, I didn’t progress.

A lot of pacing, partly out of performance anxiety but mainly to get my pedometer up. Tune my guitar, text my mum telling her to avenge my impending death. She stopped replying a while ago.

My first review was my worst – I was in the Laughing Horse New Act Of The Year final, I was less than a year in and didn’t have a great one but it was worth it for the quote ‘embarrassing an audience member never gets my vote.’ That’s exactly how I think it would go if I entered Britain’s Got Talent.

My best review was from when I performed in the Leicester Comedy Festival preview gala in 2016 – still the biggest gig I’ve done and the line up was fucking ridiculous. Nish Kumar, Lee Nelson, Tape Face, Jen Brister, Sofie Hagen, Kai Humphries & Tom Little. I was horribly out of my depth (not any more of course I’ve developed into a real game changer) but I was handed a lifeline when Simon Brodkin accidentally brought me onstage as Nish Kumar (or forgot I was on) so there was a lot of goodwill and I played a blinder. Steve Bennett described me as ‘very funny’, Bruce Dessau as ‘deliciously dark’ and I still get hard thinking about it.

Broadly I think reviewers are a welcome and necessary thing in comedy – a good pull quote is very effective in getting people in and all comics want to be told that someone else thinks they’re funny, but I’m not sure how anyone can scan a critical eye over something as subjective as comedy. Unless they’re reviewing someone who’s total shit.

I’ve not seen it and I’m not particularly well versed on ‘the law’ as a lifelong rebel, but broadly I feel that anything can be joked about so long as the joke is good enough and the context is clear. That said, the holocaust is so obviously not a target worthy of comedy that I think it’s unlikely anything could have been funny enough to warrant such a horrific use of phrasing. Also dogs are pricks so if anything the pug should be getting fined.

Again, depends on context – there are a lot of topics I don’t feel comfortable joking about but that’s more because I don’t think I possess the particular skillset required to tackle contentious topics in a funny way. I’d love to be a political comic for example but I’m to emotionally invested in how horrible the world is under the conservatives to find the funny side. Frankie Boyle is obviously fantastic at it and I admire his talent and conviction, but I don’t think I could do it. I guess I’m a coward.

Not really – my act relies heavily on an audience being in on the joke that my persona is affected and I don’t actually mean any of the horrible things I say, and that I’m actually the butt of the joke. I’ve got it wrong a couple of times, but that’s being a comic – you can’t try and fail pacing around your bedroom, you have to do it in front of an audience.

I’ve been so lucky to gig with so many of my heroes in clubs and venues I could only have dreamed of playing when I started out, but my best (or rather favourite) gig was last year at the fringe – I did a work-in-progress ‘cowards hour’ on the free fringe and as my birthday falls on 8th August I’ve spent my last 4 birthdays in Edinburgh. Last year my sister, brother and his girlfriend all came to visit me which was lovely, and on my birthday my room was packed almost exclusively with comics. I abandoned the show early doors and it ended up being a roast in reverse – I’ve never felt funnier. Bucket was threadbare though. stingy twats.

Find George Rigden on the web - 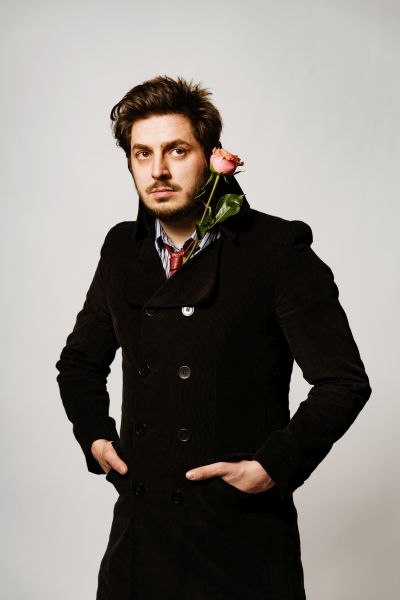 Find George Rigden on the web -

Broadly I think reviewers are a welcome and necessary thing in comedy – a good pull quote is very effective in getting people in and all comics want to be told that someone else thinks they’re funny, but I’m not sure how anyone can scan a critical eye over something as subjective as comedy. Unless they’re reviewing someone who’s total shit.