Tell me about your Edinburgh show
The show is about how I went from being a secular Jewish TV producer to being strictly orthodox and not even owning a TV (it’s forbidden!). And considering how crazy my life is now, hopefully I’ll be able to explain why on earth I still do it.

Well I did some stand-up when I was 16 many years ago but I only got back into it again around three-and-a-half years ago on the night before my 40th birthday. It was completely by chance – someone asked me to do something for a local school – and it has been a complete whirlwind since then that’s included two UK tours, two Israel tours, a South Africa tour, a five-week run Off Broadway, a BBC Radio 4 show and now Edinburgh. Really not what I was expecting back in February 2015.

Thankfully no because I’m quite superstitious like that and if there was something I’d once done I would become obsessed with repeating it. I do like to empty my bladder though.

It was genuinely thrilling to get a great review on the front cover of the New York Times arts section this month which described my Off Broadway show as being ‘a slickly funny stand-up show’.

The worst review was from a rabbi who in a rabbinic WhatsApp group called me ‘hugely damaging’. (A friend who is a rabbi and is in the group sent me a screenshot).

Yes, I don’t see why not. Obviously, I hope they are good but if they aren’t you have to have faith in what you’re doing and not let things like that bother you too much.

I’ve worked in TV and radio comedy for nearly 20 years and I’ve seen positive reviews of shows I’ve made and completely savage ones. It’s part of the business. I suppose one always hopes the review is fair at least.

I’m not a lawyer so I can’t really say whether a criminal offence was committed. Personally, I don’t get very excited about these things. Some Jews become obsessed with this kind of incident but it’s really quite trivial in the grand scheme of things. No one will remember this in a couple of years.

I don’t think so. The question I always ask myself, whether it’s stand-up or a show I’m producing for broadcast, is are you able to go on Feedback or Right to Reply et al and defend it. If a joke is gratuitous and relies on shock value and can’t really be justified then I would personally avoid it.

I refer the honourable member to the answer I gave some moments ago. I’ve had lots of complaints and people have said they don’t like this or that line. However as long as I feel I am able to defend it then I am happy to stick to my guns.

I have had a very short career and only been doing this just under three-and-a-half years. However there have been so many highs. Playing a sold-out thousand-seater in Johannesburg was amazing and likewise my first sold-out show in New York at the Gramercy Theatre. My personal favourite though was a show I did recently at my own school with Matt Lucas. It was the two of us just talking about our school days and it was such a treat to do, a real one-off occasion.

Find Ashley Blaker on the web - 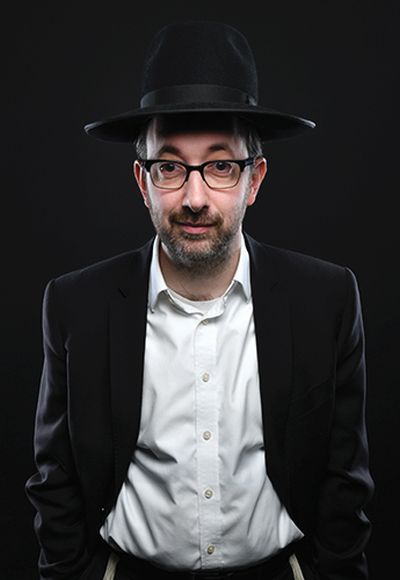 Find Ashley Blaker on the web -

It was genuinely thrilling to get a great review on the front cover of the New York Times arts section this month which described my Off Broadway show as being ‘a slickly funny stand-up show’.

The worst review was from a rabbi who in a rabbinic WhatsApp group called me ‘hugely damaging’.