It’s all about Jews and Judaism. I grew up as an orthodox religious Jew and I was never really able to capture how ridiculous some of the religion is until now. I mean, all religions have their ridiculous aspects, but this show will be about the one I grew up in.

My first gig was an open mic when I was in college. I put on a 3 piece suit because I thought you were supposed to dress up. I was the only one there not in a tee shirt and jeans. I was hot garbage but the set went pretty well, honestly. I think when you have 6 months to prepare for a set, you can manage to succeed even if you have no talent. If I’m remembering right, I had one bit about squirrels and another about bumper stickers. Jesus, I was embarrassing.

Smoke weed every day. No, I don’t have any rituals. Do other comics? I mean legitimately they have rituals, or they’re just saying they do in order to answer your question? That’s crazy if they really have something they always do before they go on. If they do that they’re psychopaths.

Of course not. That’s like sitting down with one audience member so they can give you a lengthy account of what you just did. I know how I did from the laughs in the room. I don’t need to hear one person’s “take” on it. My roommates, on the other hand, they can’t stop themselves from reading their reviews. It’s hilarious how much they care.

I mean, they serve a purpose for audiences. For movies, books, stand up, and theatre. A lot of people don’t want to commit to an experience blind. So, their existence makes sense to me. But the writing is almost always kind of shitty. Not just in comedy, but in all reviews. In comedy, the major mistake I always see them making is they concern themselves too much with subject matter over quality of laughs. If I’m an audience member, I don’t care if someone is doing bits about bicycles or about their family. I just want know how funny the hour is. For broad strokes it might come in handy. Like if they told me the show was a high percentage about politics, that’d be something I’d want to know. But I don’t need to read if they have bits about Theresa May. Who cares? Just tell me some overall stuff and how funny it is. Oh, and I HATE when reviewers give away a gag by writing up the setup or punchline. Asshole. It’s difficult to properly set up a joke. We don’t need you giving anything away before people even sit down.

I think your country should be embarrassed at what happened to that guy. For a cop to arrest him for making a joke (that I found funny) was ridiculous. For a judge to back it up with a conviction is scary. The message they’re sending is that if you cross some imaginary and ever-changing line, you’ll be in serious trouble. And the effect of that is comics won’t find out what the line is for themselves. Who would try a really out there bit if it might mean jail time or a financial hardship they can’t afford? It’s slowing down development of an art form in younger comics. And by the way, the dog didn’t salute to “Gas the Jews.” He saluted to “Heil Hitler.” He only perked his head up to “Gas the Jews.” I can sort of understand if you want to limit speech in people if that speech directly and obviously leads to physical or monetary harm of another person. But when you’re taking a guy who was CLEARLY going for a laugh and telling people that might also go too far, you’re killing comedy a little bit. And when a judge says that he couldn’t have been doing it to fuck with his girlfriend because she doesn’t subscribe to his YouTube account, that judge is telling me he has almost no understanding of how the internet works. You don’t have to subscribe to a page to see a video, you fucking idiot. Why are you passing judgment on a medium you don’t understand. Let somebody younger rule on this case while you go fox hunting or whatever the fuck old, out of touch people do with their time. Retire, you fucking hack of a judge.

Yeah, tons of times. Who cares?

Dude, the fact that I get paid to tell glorified dick jokes is amazing. So almost every gig I do is awesome on that level. And I hate superlatives like “best” or “favourite” because they’re too exclusive and final. But one of the gigs I really remember was the first time I opened for Joe Rogan. It was in Denver at the Comedy Works. Widely thought of as perhaps the best club in America. I had pretty much only done open mics up until that point. Or occasional gigs where it was shitty enough that some open mic-er could headline. But this was a real show. A national headliner with a draw was performing and people were coming out for that. It was unbelievable. I couldn’t comprehend how an audience could laugh that much or that hard. It made me feel like a pro for the first time in my life and that made me believe I could really do this as a career. I always hoped that would be the case, but that weekend made me really believe it.

Find Ari Shaffir on the web - 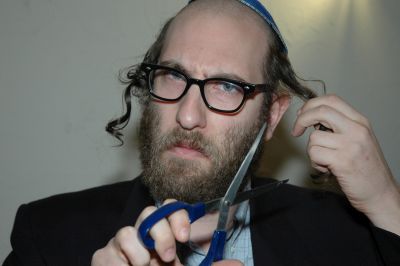 Find Ari Shaffir on the web -

I HATE when reviewers give away a gag by writing up the setup or punchline. Asshole. It’s difficult to properly set up a joke. We don’t need you giving anything away before people even sit down.