As this is quite a vernal question, I’ll give you a general answer. It’s a stand up comedy concert. It usually goes for about 56 or 57 minutes. If reviews are to be believed (are they?) it’s worth between 3.5 to 5 out of 5. I speak very quickly, mainly about myself. Recently a lady told me after that she was moved to tears by a part of the show. I can’t for the life of me imagine which bit she’s speaking about but you know what, I’ll take it.

I was 16 and had been snuck into a pub in Sydney to try open mic. I think I might have given away I was underaged when my whole set was about my friends at school. And wanking. I spoke a lot about wanking.

I like to have a whiskey and a coffee and let them fight in my body. I will pee upwards of 5 times in the hour leading up to the show.

An elderly lady was once shuffling out during a spot and I heard her say loudly to her husband “I think I’ve seen enough of what this boy is trying to do”.

Oh absolutely. Not just my own either. There is few greater feelings than when someone who has wronged you gets an unquotable 3 star review from a reputable publication.

I think reviewers are a necessary part of show business. I also think things would be a lot better if we didn’t tell them that.

I don’t think it’s necessarily a criminal offence but It’s pretty fucking stupid. I think a lot of people confuse “jokes” with “doing something fucked”. I think he should legally and permanently change his name to Count Dankula as punishment.

I’ve always thought there aren’t any subjects not suitable for comedy, just people who aren’t. Like it’s all about context. It is possible to make a joke about a someone getting burnt very badly, but you’re not going to make that joke at the burns victim recovery ward of a hospital are you? Anyone who’s said “You can’t say anything anymore” is usually and straight white male whose just said something fucked.

Yes, and I almost definitely will again.

Being able to have performed at the Sydney Opera house a few times has been very nice. Also there was this gig once in Country Australia. I bombed quite hard on stage but afterwards I ate this delicious beef pie. I think about that pie a lot. Best gig ever.

Find Rhys Nicholson on the web - 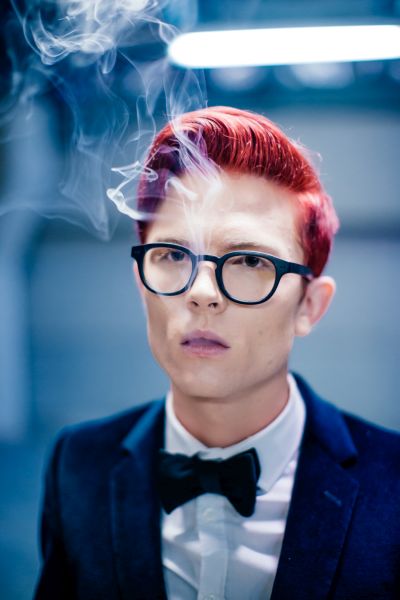 Find Rhys Nicholson on the web -

I think reviewers are a necessary part of show business. I also think things would be a lot better if we didn’t tell them that.