I’m an Australian comedian and my show is the form of a basketball game! Four quarters of twelve minutes of jokes! Each quarter is different from: “more about me” to storytelling, longer bits and shorter jokes!

RAW Comedy heat, which is a national comedy competition in Australia. Performed at The Rhino Room in Adelaide, South Australia in 2007. Went on last and did ok but did not make it through. Gordon Southern introduced me as “Ross Voss” and it stuck. Received some positive feedback from comedians, which encouraged me to pursue this craft.

Not really but I try to be prepared, i.e. I write down my set list and generally rehearse several times leading up to the gig and on the day.

Ah, this is a big question…! In 2009 I did a group show entitled “Taking the Piss” with 5 other local South Australian comedians. The review, said that five of the six comedians were worth seeing again. Guess who was the one not recommended?! Best reviews are usually from individual audience members, who tell you that their face hurt or that they cried of laughter. Comedy is subjective and challenging to review.

I’m not familiar enough with UK laws, but it seems that if this wasn’t funny, then it could just have been in very bad taste or immoral, which is different to something being illegal.

Technically no, as long as it’s funny but a comedian should keep in mind that people are there to have fun and enjoy themselves. We should not offend on purpose and some subjects related to abuse or race may bring up some issues for people, so approaching such topics respectfully or steering clear of them, is advised, especially for emerging comedians.

Several times but an audience will always let you know where the line is. You can learn from this experience and then turn that experience into more material! So, everybody hopefully wins!

Every gig and audience is different but I felt fulfilled during and after my last show in the Edinburgh Fringe in 2016. I had a small audience of 8 people but they all laughed in unison and the show was a success. I also performed a spot around 2012 at The Rhino Room in Adelaide, where a full audience of about 60 people laughed at every joke, where I went for exactly 5mins in a 5-minute spot, which was perfect as you could get in that situation.

Find Ross Voss on the web - 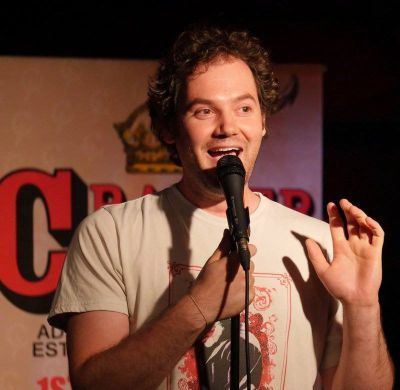 Find Ross Voss on the web -

In 2009 I did a group show entitled “Taking the Piss” with 5 other local South Australian comedians. The review, said that five of the six comedians were worth seeing again. Guess who was the one not recommended?!