In September I told my agent that I was having trouble coming up with ideas for my show as I’d been diagnosed with agoraphobia, autism and ADHD, and so I don’t go out of the house and stay at home getting distracted all on my own. She said, “There’s your show!” and so it was born. It’s the Everyday tale of a trans lesbian and her Swedish girlfriend slowly driving each other mad in an old Victorian terrace. There’s filth, fighting, and a bit about Spider-man.

My first gig was MCing a rock night in Preston in 2003, My friend said “you want to be a comedian, don’t you? Well I need someone to go on between the bands” and I did. I wrote 45 minutes of material and got one laugh in the whole time. But that one laugh was enough for me to go “If I can do that, I can repeat it and string more together” it was wonderful. A lot of people ask how you got into comedy and that’s it, the more important question for me is “why did you get into comedy?” and that answer is “An almost pathological need to be liked combined with an inability to feel enjoyment.”

No. Oddly for someone with OCD I do not. I try to keep as little of that as I can, because it can build up into elaborate full days’ worth of things to do in a certain order which then becomes self-defeating. When I started out I had long, drawn out rituals and had terrible stage fright, then one night I got a gig with under 2 minutes to show time when someone didn’t turn up and I stood there panicking and my rational brain talked me down finally. “You only have the same set you’d do anyway, it normally works, there’s no reason it wouldn’t work now” and I had a blinder of a gig. Never had stage fright or a ritual ever since.

I don’t read my reviews generally, but I got sent one from the Birmingham Mail which was almost all pull quotes. The worst reviews I got were for my second fringe show almost all the reviewers who saw me for the month were in on the first Saturday, also in on that night were about 15 people who couldn’t get tickets for Spank! and were in various states of intoxication. My show was a delicate personal story about me coming to terms with my addiction, which destroyed the minds of three guys who’d dropped acid an hour beforehand. I spent the entire show trying to talk them down from the bad trip they were having. My PR team were all in that night, and as far as I could tell from chatting to them afterwards they didn’t see how it had gone wrong. All the reviews that came in said things like “Bitter and self-indulgent” and “Disappointingly Second-rate” one even referenced the guy having an acid trip when he started spinning out going “‘Oh god this is awkward’ which sums up the general feeling of the rest of the audience watching Bethany Black”

I don’t read reviews at all, because they’re not for me they’re about me.  It’s the same reason I don’t google my own name.  I don’t care who’s calling me a cunt, and I don’t necessarily want to see it.  Great reviews make you feel arrogant, and bad reviews crush you.  I’ve spent 2 years of my life working on this show, I know it’s good, I achieve everything I want to with it, therefore reviews of it are irrelevant.

Reviewers don’t review shows.  They think they do, but what they’re actually doing is reviewing their response to it. The realisation that when reviewing art, reviewers are reviewing their own preconceptions and ability to deal with it leads me to wonder why the ones who come to my shows are so hard on themselves?   When you come face to face with a piece of art you can only review the feeling it gives you.  More often than not they’re reviewing audiences, and unfortunately sometimes I’ve been saddled with 3 and 2-star audiences.  Some of the stuff that I do requires an audience that’s been together a while and is able to do some intermediate to advanced level comedy audiencing, and my hope this year is that more reviewers understand that.

He absolutely broke the law.  I don’t even think that it’s a freedom of speech issue, like Tommy Robinson it’s more a “Silly Bastard” issue.  There are hate crime laws in place in the UK because whether you believe power structures exist, and whether you believe that words do or do not have power to affect actions, the law in the UK does. and he broke that law just like Alison Chabloz did when she sang anti-Semitic songs and put them up on YouTube and was also arrested, charged and tried under England’s version of that law.  I think what’s particularly interesting about the Meechan case is how it highlights how the far right are weaponising the “freedom of speech” argument to drive a wedge between the left and right and to help drag the Overton Window to the right.  They’re forcing those on the libertarian right and left to side with the guy who’s saying the racist things he actually believes but says is a joke, and you see people across the political spectrum standing up for him being allowed to say that, but you see very few of them standing up for the rights of minorities who are being bullied out of public discourse.  If freedom of speech means anything it’s that words can have power, it’s not freedom from responsibility nor freedom from consequences. And with great power comes great responsibility.  (Knew I’d manage to get a Spider-Man reference in)

No. And I think a lot of the time people’s offence at comedy comes from not understanding the difference between the subject and the object of the joke. I joke about disability, sexual assault, mental illness, transgender issues, cancer, Islam Christianity etc. They’re just subjects, I think you have a responsibility as a comedian to make people laugh.   Most people I know have jobs they hate with people they hate and bills they hate, and they get a small amount of time to enjoy to themselves, and if they’ve chosen with that time to go and see a comedian, that might be their one night out that month, I’ve got a responsibility to give them the best night I can. The trick (Which I’m ashamed to say took me the best part of a decade to learn) is how to be able to talk about taboo subjects in a way that won’t either retraumatise someone if I can at all help it, or make them feel like the whole room is laughing at them. The power differential between everyone laughing at you when you’re on stage because of what you say, and everyone laughing at you in the audience because of what you are is huge.

Yes.  When I started out I was an absolute edgelord.  90% of my material was based on whether it was shocking, whether it made people uncomfortable.  Turned out “Funny” was way down on that list.  As a result I’d go too far, and when I was heckled I’d go nuclear as my first response.  In Liverpool about 12 years ago I was being heckled by a guy who was indecipherable, so I replied, “You might be coming out with the most erudite heckles in the world, but all I’m hearing is ‘Daddy, why did you never love me?  Why did you never read me a bed time story?'”  He replied, “My dad’s dead!”  And I should have left it.  However, I replied, “no that’s just what they told you so you’d drop the charges about him touching you up as a child”  he smashed a bottle over his table and bouncers threw him out and a fight kicked off.  When I quit drinking and doing drugs I calmed down a lot, all I want to do now is make people laugh and get through life with the minimum of fuss.

Best gig of my career, a few weeks ago I got a phone call on a Monday morning telling me my Friday night gig had been pulled due to poor ticket sales, but I’d still be paid the full fee.  I almost cried.

Find Bethany Black on the web - 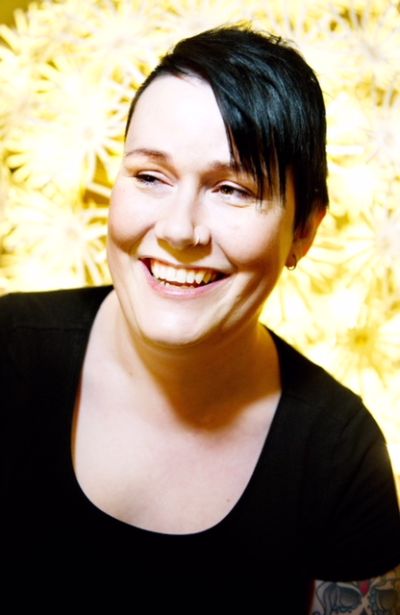 Find Bethany Black on the web -

I don’t read reviews at all, because they’re not for me they’re about me. It’s the same reason I don’t google my own name. I don’t care who’s calling me a cunt, and I don’t necessarily want to see it.