My first Edinburgh show was a two hander with the fantastic Paul McDaniel in 2013. It was a free venue and we had to cordon off our performance space from the main bar with a black curtain (that we had to go out and buy). They delivered Nachos across the stage during the show and left the football on the televisions above our heads throughout the fringe. I have rarely felt as depressed as turning up on a Saturday to discover a stag do would going to be chanting and slapping each other on the other side of our thin cotton divider. Occasionally they’d shout ‘tell us a joke’ and all laugh. Standing there I finally understood why people do suicide by cop.

I think my first gig was somewhere in London in about 2006, I tried it a few times when I was about 17 and just couldn’t make it work. I think I had some material about the ex Birmingham forward Clinton Morrison which I thought was pretty much bulletproof. Sadly it never quite found the mark, much like Clinton Morrison. I then gave up for five years.

No, not really. Although I’ve found that comedy doesn’t work for me if I’m wearing shorts, something about my legs just seems make people think ‘hold on, that’s not funny’.

My best was for a comedy play I wrote and directed in 2015. My stand up shows are quite theatrical so it was pretty much a stand up show only performed by the magnificent Clare Sheppard, it taught me a lot about how I want to do comedy. We got four stars and a middle page spread in the Scotsman. I think my mum bought every copy in Edinburgh. It was a great day.

My worst was for Dead Man’s Chest, the show I’m doing now. Maybe I shouldn’t say that? It was two stars from the Glasgow Comedy Festival and the guy just didn’t seem to understand the plot or ideas. Thankfully I have a video of the show from that night so I know it was nowhere near as bad as he said it was. I think he was just confused because I’m not Peter Kay, and he couldn’t grasp why. Its hard sometimes when you’re an alternative comic because people will grade you against the mainstream ones, when you’re actually trying to fulfil a totally different niche. Still, at least I’ve not thought about it literally every day since it was published.

I do my own PR so I think I probably will. I simply couldn’t get any reviewers in last year (if you don’t pay thousands for a PR agency, reviews are sometimes difficult to attract). So I probably will, I’m not sure yet. The show is good so the reviews must be good, right? RIGHT?!

Like anyone, some are impartial and know their stuff, some aren’t. In 2015 I was getting threes until I started saying in the last 15 minutes ‘This is what the show is about’ and suddenly it was all fours. Equally in 2016 I did a show about losing control, in which the show slowly lost control, and one reviewer marked it down saying that by the end I’d lost control. I couldn’t believe it, she gave it a bad review because I’d done what I’d set out to do.

I was once in a Mr. Swallow show about five years ago sitting next to a reviewer and we both laughed throughout, so we should Nick Mohammed is exceptional, and when the review came out he’d given it a two. Ever since then I take reviews with a pinch of salt.

I think that’s hate speech, not comedy. One of the things the right wing do a lot is couch their bile in memes or other mediums in order to seduce young people into consuming them, so it’s important to nip it in the bud wherever it’s found. All of the people whining about it impinging ‘Free Speech’ generally don’t really know what that means or how potent these awful ideas are. PS. I would have fined him just for using the name ‘Count Dankula’.

No but we need to be careful about how we treat these subjects. The reason they’re funny is also the reason they upset and hurt people, because they’re relatable. I hate comics who think they’re ‘edgy’ or ‘dangerous’. You’re not a warrior for freedom, you’re a clown, and clowns have big feet, so be careful where you tread.

Yes, lots of times. We all make mistakes. You just have to resolve to be better, for the good of everyone at the gig, and in society.

Well, as you’ll imagine, I have PLENTY. But, I do remember I had one day at the fringe in 2016 where the audience just bought into the show idea from the get go. I’d built a planetarium and did comedy about Space, being underwater, journeys, and unity in the face of division. They just bought in, didn’t need any persuasion, it was like for once I was the kind of comedian they wanted to see. I think I made £300. it was awesome.

Find David Callaghan on the web - 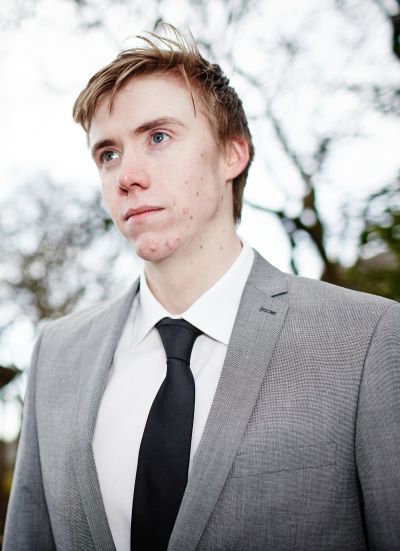 Find David Callaghan on the web -

My best review was for a comedy play I wrote and directed in 2015… We got four stars and a middle page spread in The Scotsman. I think my mum bought every copy in Edinburgh. It was a great day.