BonQrz is a theatre comedy show about how making disastrous life choices lead me to want to become a budgerigar. I then go into detail about all the disastrous decisions I have made and try to convince a budgie why I will be a great addiction to her flock.

It was ages ago. I did a joke about darts during university when I was 20. It was really shit. I also did an Amused Moose competition which was run by Hils Jago and I didn’t get through. I was only 21. I was crying down the phone to her like a saddo asking why I didn’t get through because I had the whole room pissing themselves with laughter and she replied that what I did on stage was not stand up it was something else. That is why I don’t care about competitions. All that matters is entertaining the whole audience and performing the best you can.

I have an anxiety attack.

I was called the bastard child of Andy Kaufman and a comedy genius by Fringepig’s own Martin Walker once. Then Erkan Mustafa from TV’s Grange Hill replied online, “comedy genius or someone who needs to be sectioned?” I’ve had really nice reviews to be honest… Mostly descriptions that make me out to be some kind of wild cave woman… Someone else said, “I’ve never been so frightened and aroused at the same time…” Let’s see what happens this year!

No that will spoil my show.

There are some fit ones and some minging ones… Borderline incel.

Imagine if he had been incarcerated?   In prisons they have different sections depending on the offence, Where the fuck is he going to go?

It’s not a crime. T’was a joke and the point of the joke was to get the pug to do something really horrible to piss off his girlfriend.

What I find racist and classist is when there’s a pure hatred towards a certain type of people. A lot of people on social media virtue signal but then only socialise and cast the same type of people, from the same class and race, in their shows. Then to appear, “diverse” they cast only a few people outside their class to look good. If you want to see if someone is sexist, racist and classist have a look at their Facebook friends list and who they hang around with. #doublestandards.

No. I had a discussion the other day about mocking racists and racism. How do you mock a prejudiced person without being seen as prejudiced? Anyway, people should be free to say what they like and deal with the consequences. Also, I will then know who is obviously prejudiced and I will actively avoid them. As I said right now prejudiced behaviour has become passive where the majority tokenise certain types of people and only bring them in to look more, “diverse”. Anyway budgies are far more interesting.

I did a strip prank once and my freedom of choice and expression offended a few third wave feminists. They get even more worked up when I say I am not a feminist. I know a few women who say they are feminist and believe in equal rights but then quite often they want to wear the trousers in their relationships (heterosexual partnerships).

Old feminism was great, because it actually helped women win the right to vote and change laws etc. Current feminism is beyond ridiculous and has gone too far when it comes to sexual expression. This is why I reject their ideology. I saw a twitter post about how short/shaved hair is empowering for women.   Strength and empowerment comes from within not your appearance.

Many of my friends, including myself, are frowned on because of the way we talk and behave. They say that sexual expression encourages rape culture. No. Stifling sexual freedom and a criminal mind creates a rapist. Furthermore, men also go through abuse. We just never hear about it as it is not often reported. We never hear third wave feminist outrage when a man is sexualised or abused. All genders objectify and sexualise. There’s not a day that goes by where I thought to myself, cor he’s got a nice arse would like to cover it with cream cheese. I personally feel stifling sexual expression is a root cause of many problems.   You only have to look at societies that see sexual expression as a taboo or, “wrong”. It’s not a coincidence that the statistics for rape/incest etc is higher. Am I talking nonsense? Please get in touch and I’ll send you complimentary millet & budgie mirror.

I did a weird song and dance based on the audience’s choices of emotions. I love being stupid.

Find Narin Oz on the web - 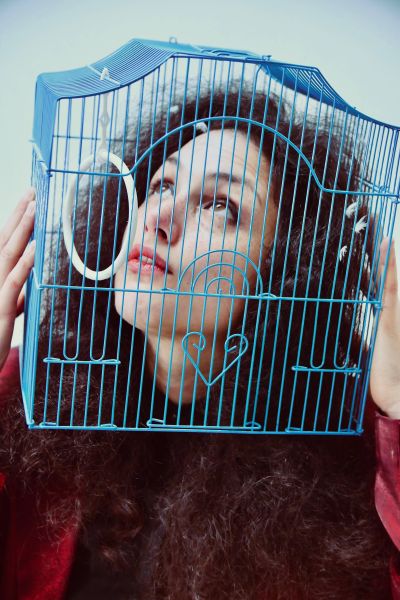 Find Narin Oz on the web -

I’ve had really nice reviews to be honest… Mostly descriptions that make me out to be some kind of wild cave woman… Someone else said, “I’ve never been so frightened and aroused at the same time…” Let’s see what happens this year!