One of the most remarkable books of the last few years is OJ Simpson’s book ‘if I did it’, a completely hypothetical account of how he would have committed double murder. Not remarkable in terms of writing, it’s shit writing, though amazingly detailed and imaginative, remarkable in the sense of admitting to something he clearly had nothing to do with. Anyway, I worked in Banking around the time of the financial crash in 2008. In this show I’ll reveal the incompetence, the systematic bullying, the criminal negligence and ‘the sex room’ in one of the world’s biggest Banks. I was a middle manager and then suddenly I had to make a massive decision, a decision that caused the crash. But that’s only of course, if I did it.

It was at the Balham in Bedford, a stupidly large venue for a first gig. I had bought myself an Ozwald Boateng bright purple suit. I was getting changed into the suit upstairs and the promoter looked at me and said, ‘you clearly know what you’re doing’. All these years later, I realise what he meant. He meant you know what you’re doing, and that’s putting on a fucking ridiculous suit about to go out on a massive stage without any jokes. Good luck prick!

Don’t be silly. I did do a one-man theatre show last year though and I started winking at the tech before I walked on stage. He reported me for that so I immediately stopped and there was no further action.

The Buxton Fringe review I got last year said, ‘Having seen Bill Hicks I can honestly say he’s as good as him’. Pretty fair I think. Steve Bennett of Chortle once reported I’d had ‘a difficult gig’ (presumably in that they were laughing too much) … ‘the entire second row were pissed, and there are only two rows.’ That’s not my fault is it Steve? I’m not on the door saying ‘fill up from the front… are you on the second row? – oh, have a bath of alcohol. Are you on the third row? Ah, fuck off, I cap numbers at ten.’

I won’t be reviewed, I don’t have PR. I caused the financial crash of 2008 but the real scoop of this year’s Fringe is someone’s great, great grandad is dead.

I like it when I change a reviewer’s opinion. Kate Copstick called me ‘Stormingly good’ this year and ‘arrogant’ 8 years ago. Generally though, I don’t give a fuck about reviews as I’m stormingly good. It’s just one person’s opinion – I don’t find some comedians in the least bit funny that other people love. That doesn’t mean they aren’t funny. But really, they’re not. That guy who was nominated a few years ago. I saw the show, it was horse shit.

Because he called himself Count Dankula. The real tragedy of this story is that dog had something very, very special, and a slightly tweaked trigger phrase and he’d have won Germany’s Got Talent.

Gravel. I doubt you could get any laughs from gravel. Any kind of aggregate really.

Yes. I once travelled to Manchester for a gig for only £50.

A month or two ago, I did a preview of my new show at Camden Comedy in front of a small crowd. Two men, who have followed me over the years at the Edinburgh Fringe, travelled from the Isle of Man just for one night to see the preview as they wouldn’t be in Edinburgh this year. This kind of thing means so much. And it turned out they worked for the Bank I brought down. So in effect I’ve decimated their pensions and they still adore me. But, of course, that’s only if… any of this is true.

Find Nathan Cassidy on the web - 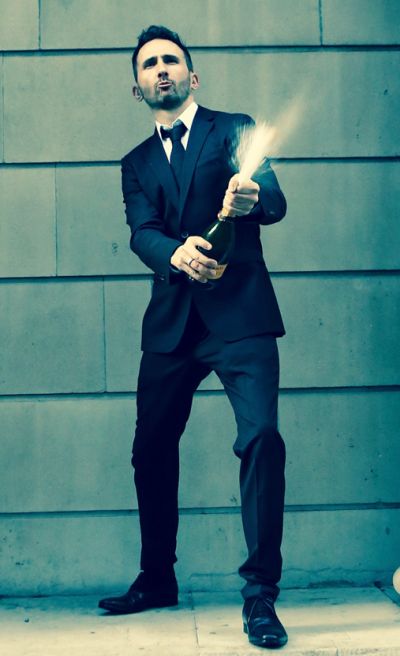 Find Nathan Cassidy on the web -

Steve Bennett of Chortle once reported I’d had ‘a difficult gig’ (presumably in that they were laughing too much) … ‘the entire second row were pissed, and there are only two rows.’ That’s not my fault is it Steve?