Our show is called Richard Pictures*. It’s a sketch show by Anna Leong Brophy and Emily Lloyd-Saini – two off-white women ready to ask all the questions that aren’t about fertility. That’s not why we called EGG guys, come on.
*a classy dick pic

Our first gig was at Leicester Comedy festival in 2016. It was the first time any other humans had seen our stuff. Emily’s friends from Nottingham turned up and she was terrified because they’d never seen her do character stuff before. But it ended up being all the fun. However, none of those sketches made it to our show.

We hold each other, tell each other we got this, then pull faces at each other in silence until it’s time to go on.

Our best review took the form of an audience member getting one of our punchlines tattooed on to himself. There’s no amount of stars that can beat that.
The worst was actually a good review that published the majority of our punchlines… not exactly helpful.

Absolutely. We can move on if we get a bad one. We love what we’re doing and it’s the audience that matter.

We love good ones. That’s not to say they have to love us, sometimes even the criticism is spot on. But it can be disheartening to read something where it’s clear the reviewer has no experience in the field.

I mean we’re not trained in law, we’re trained in making jokes that don’t suck as bad as his. He’s not invited to our show.

Of course. But it’s relative. What’s distasteful to one person might be hilarious to another. Our personal motto is we never punch down.

Yes. Let’s end that there shall we…

Our 2nd ever set was at the Southbank Centre. It was 15 mins and we were so new. But every joke hit, it was lots of fun and we realised we were onto something good. And here we are now…

EGG was talking to Wrigley Worm.

Find EGG on the web - 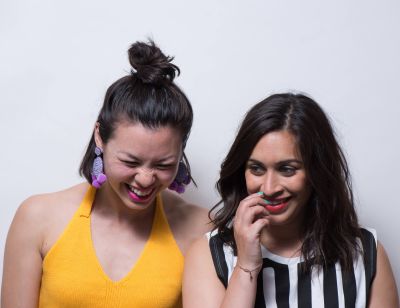 Find EGG on the web -

Our best review took the form of an audience member getting one of our punchlines tattooed on to himself. There’s no amount of stars that can beat that.
The worst was actually a good review that published the majority of our punchlines… not exactly helpful.