A Piggy Interview WithGlenn Moore (How Do You Like It)

I’ve written a very joke-packed show about going to Mars. I’m writing this answer in May, and I feel confident in saying it would already be too late in the day for me to change my mind and write about something that wasn’t about me applying for the first civilian mission to Mars.

A friend was running a comedy festival in Sheffield, for which I was very much an audience member. Their host dropped out on the opening night so I was asked if I could put some jokes together in the space of an hour and then cover the slot. My memory of it is pretty positive, but holy hell it must have been garbage. I must have been absolutely terrible. Like, really spoiled people’s nights.

I say loads of tongue twisters, which in the privacy of my flat are absolutely fine, but when done aloud on the walk to the show cause real moments of concern for members of the public.

I was in a play at university, and a review got misprinted in a section assessing each of the cast members. I got described as ‘Glenn was.’ In many ways, my best and worst review.

For my first show I did, but although I liked the reviews, I didn’t enjoy the panic of seeing a review had been posted and warily clicking on it. Last year I decided in advance not to read reviews, but ended up reading other people’s good ones, which wasn’t a good idea, so this year I’m not going to read anything. At all. I’m not even going to read my damn e-mails. You can’t make me read.

I’ve never avoided a show because of a review, and some of the best shows I’ve ever seen I would not have known about had I not read a review. What this all comes down to really is that I’ve shown myself to be a sterling, balanced member of society.

I have written out and deleted, and re-written my answer to this three times now, so I’m just going to say no, but also he’s a nob.

After giving a good go at it last year, and approaching it from every angle, I’m going to put my head above the parapet and say material about the Alton Towers resort does not lend itself well to comedy.

I had a gig in Birmingham a couple of years ago, and after just blindly following what I put into Google Maps, I ended up in Manchester, too far away and too late to go to the show. So geographically, yes.

I know this isn’t what I should say was my best gig, but there used to be a club around the corner from my house, and they once started dead on time and I was home by 8:35. I think that’s the best gig I’ve ever had.

Find Glenn Moore on the web - 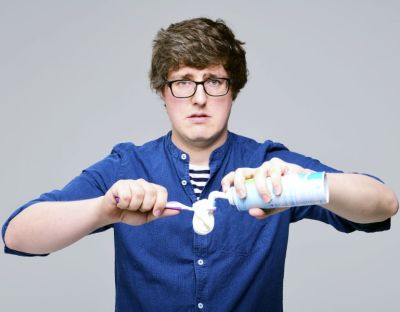 Find Glenn Moore on the web -

Last year I decided in advance not to read reviews, but ended up reading other people’s good ones, which wasn’t a good idea, so this year I’m not going to read anything. At all. I’m not even going to read my damn e-mails. You can’t make me read.