Well, I don’t know if it’s gonna be the best show in Edinburgh this year but I’d be pretty surprised if it wasn’t top 3. It’s a character comedy show, the character being Don Rodolfo, an arrogant, preening, chauvinistic man-child fighting his way around 17th Century Europe, having adventures and bedding anyone who comes within 5 feet. He’s toxic masculinity personified, the idiot version of Don Juan or Casanova with more swords. The show asks the question, “Can you make a swashbuckling adventure with one man in a portacabin?”…at the time of writing the question has not been answered.

It was with my sketch group BEASTS in Bethnal Green Working Men’s Club and the only audience were the other acts on the bill and the comperes girlfriend. I don’t think she laughed once but one of the acts helped us get our slot in Edinburgh that year – so despite nobody seeing it, it was the night comedy changed forever.

I eat an entire bag of Haribo Tangfastics for a sugar rush, I shake my hands a lot but I don’t know why and I listen to god-awful music.

The fact I can’t think of much of either is probably a good thing, I don’t hold them in the highest regard, and I don’t dwell too much on them. Good would probably be some from Mark Monahan or Marissa Burgess, I can’t think of what shows they were for or what they said but they’re two critics who always seemed to get what we were doing. I remember taking umbrage with one review for BEASTS Live DVD, because it was written in quite a cruel tone and implied the show was badly written, while also acknowledging that the majority of the audience laughed solidly for an hour. Comedy’s hard and if you can make a room of people laugh for an hour night after night it’s written pretty well, maybe not to your taste, but not bad.

This is my first year going up solo – in the group I always read reviews because if they were bad I could share the blame three ways, not evenly and always in my favour. But now it’s just me and I haven’t decided yet. I’m gonna assume my narcissism will make me read them at some point.

Well there are different types, aren’t there? At the fringe there’s a lot of young ones, who barely know themselves let alone comedy, but they’re having a go and best of luck to them. Unless they say something bad, in which case there’s a special place in hell. The ones who’ve been around the block, who work for bigger publications, have a greater frame of reference and a better understanding but that’s not always helpful as the amount they’ve seen can make them a bit numb to it – sometimes it needs to be edgy or different just to make them feel something, and the something they feel is still rarely joy. The more you see the less inclined you are to laugh, the more you dissect the less funny something is and you prioritise something you haven’t seen over something you have – which puts some acts at a disadvantage. Some people are just trying to make people laugh in a room – not everyone has to reinvent the form. I see a lot of reviewers buying into the PR and the hype and the trends, and that’s to be expected a bit but I think it’s their job to be above it. Fundamentally, to write a review of a show that has taken a person months or years to make, without knowing the process, the tears and stress that went into it is a fairly impossible task – I wouldn’t want it, but I wish more of them felt the weight of that power more intensely.

Looking at what the judge said he feels those words and that gesture are “inciting racial hatred” and the context isn’t important, but context is important in comedy and the context he presents in the video says to me this had stupidity more than hate behind it. It’s a stupid joke, certainly not a funny one, but the fact I don’t find the joke funny doesn’t mean I get to decide its not one. The truth is I can’t know what his intent was, if there was malice under the surface, but neither can the judge and I think it’s a dangerous precedent for the law to decide what is a joke or what a comedian has in their mind when they make one, as the law has a famously bad sense of humour. It’s hard to stand up for a guy as repugnant as him, or a “joke” as bad as that, but if I’d argue for the free speech of comedians I like, I guess I have to do it for this knob.

There are things I personally wouldn’t have in my comedy but I don’t believe those are things that nobody can talk about – it depends on context, who’s making the joke and who’s the target of the joke.

Not with anything I’ve said but my venue in Edinburgh did once sit me down and have a talk because I distressed a member of the audience by putting my bum too close to their face – absolutely fair enough.

One that sticks out was Bestival a few years back, we were there with a lot of friends and other acts and had gotten incredibly messy on the Friday and Saturday nights before our 12pm Sunday show. We felt awful, I was particularly delicate, we thought nobody’s gonna come out that early, it was the first festival we’d done and we’d been warned that people wander in and out and rarely give their full attention. But it was in this beautiful open-air amphitheatre that filled up right before the show, and people kept arriving throughout till all the woods around the amphitheatre were full and people were climbing and sitting up in trees to see. The show went as well as it ever has and at the end we got an instant standing ovation from everyone and I cried. Told you I was particularly delicate.

Find Ciarán Dowd on the web - 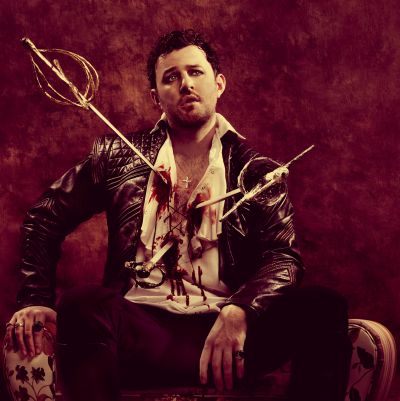 Find Ciarán Dowd on the web -

This is my first year going up solo – in the group I always read reviews because if they were bad I could share the blame three ways, not evenly and always in my favour.