Tell me about your Edinburgh show.
Interruption Show is a stand-up compilation I started at All Out Comedy Theater in the San Francisco Bay Area, where I bring rotating co-hosts to sit on stage with me panel-style and interrupt a showcase of stand-up comedians mid-performance to ask them questions and dig for backstories about their jokes. This is usually by ringing a bell, honking a horn, or some other annoying sound-making thing. Comedians react, think on their feet, and find new angles to their jokes, audiences learn previously unheard stories from their favourite comedians, and no two shows are ever the same. It’s a wonderfully fun show and having co-hosts adds banter and energy.

Tell me about your first gig.
Comedy Virgins in Stockwell! It was well-attended, I had terrible stage fright, and like six or seven friends came to support. I did well, which assured me and then made my next couple years of bombing all the more painful.

Tell me about your best and worst review.
Reviews are mostly a UK thing and I stopped getting them after I moved, so I only have a small handful to choose from. The best was Steve Bennett from Chortle calling me “a very promising writer.” The worst wasn’t really negative but was just poorly written by some rando. It said it was a review in the title, and the other comedians on the show were reviewed, but my set was just described with no evaluation like a play-by-play, including giving away a punchline. So the reviewer’s conclusion was…that I was there. I’m sure I’d have more negative reviews if I’d continued living in the UK, so that’s what y’all get for deporting me.

During this Edinburgh run, do you plan to read reviews of your show?
Do people review compilation shows? That sounds sad and kinda thirsty but if that happens sure, I’ll read it if I have time.

How do you feel about reviewers generally?
They should have to provide a list of their favourite races and genders right at the top so we know their biases going into it. And they should have to justify their credentials as writers and as people familiar with comedy. A lot of times it’s people who can barely string together a sentence, and it feels like it’s their first time ever writing anything, and probably their first time watching comedy. Prove to your audience that your mother didn’t just give birth to you at this comedy club today, and that you didn’t just now decide to try your hand at the written word. It’s really easy to critique something and really difficult to create something, let alone create something good, so I think people should review reviewers, call them on their biases, and at the very least correct their weak ass grammar.

In April 2018, YouTube comedian, Markus Meechan (aka Count Dankula) was fined £800 for training his girlfriend’s pug dog to do a Nazi salute with its paw, in response to the phrase ‘Gas the Jews’. Do you believe Meechan committed a criminal offence, and why?
What on earth is a “YouTube comedian”? You mean the website for music videos? Whether it’s a criminal offence depends on which country he did it in and what the laws are there. Couldn’t have been America; if that happened in America they would have made him Secretary of State.

Are there any subjects that are not suitable for comedy?
There are no unsuitable premises, but if your punchlines are boring you risk boring your audience to death, and that should be criminalised.

Have you ever gone too far?
No, I am a good Egyptian girl and I am saving myself for marriage. Please don’t ask me any more personal questions.

Looking back over your time as a comedian, tell me about the best gig of your career.
Any gig where I crush in front of my enemies or people who booked me as a token is a great gig in my book.

Find Dalia Malek on the web - 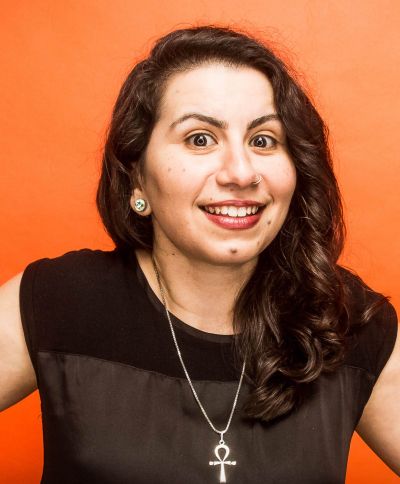 Find Dalia Malek on the web -

Reviews are mostly a UK thing and I stopped getting them after I moved, so I only have a small handful to choose from. The best was Steve Bennett from Chortle calling me “a very promising writer.” The worst wasn’t really negative but was just poorly written by some rando.