Tell me about your Edinburgh Fringe show.

Attack is the best form of defense.

My first ever stand up gig came after I had already been a professional circus act for a number of years. I rang up the Frog and Bucket Comedy Club, (that had just opened in Manchester), to ask for an open spot. The manager had already seen me doing cabaret shows in the city, and offered me a paid gig straight away. So my very first time doing a stand up set, I actually got paid. It really was a different world for comedy back in the 1990s.

I always look in the mirror and count my teeth. This is an ancient tradition that all circus performers do. The theory is the you are checking even the smallest detail, and over time it must have just evolved into a superstition. It is the circus equivalent of saying; “break a leg:” Circus people say; “count your teeth”.

I never, ever read reviews. The dog does not care about the opinion of the fleas.

At best they are parasites.

Unless it is demonstrability an actual ‘Hate crime” then I’m with Evelyn Beatrice Hall on this subject; “I disapprove of what you say, but I will defend to the death your right to say it”

No, but it is the comedian’s responsibility to make sure that their ‘edgy’ joke is actually funny and not just a shock tactic. Many new comedians say; “a groan is as good as a laugh” this is bullshit. Only a laugh is as good as a laugh…unless you are gigging in the Groaning Club.

To quote the great John Cooper Clarke; “too much is not enough, now lets not be naive”

I’ve done 250 to 300 gigs a year every year, for over 30 years, and this question is actually the secret to longevity as a comedian; The best gig of my career… the next one.

Find Martin Mor on the web - 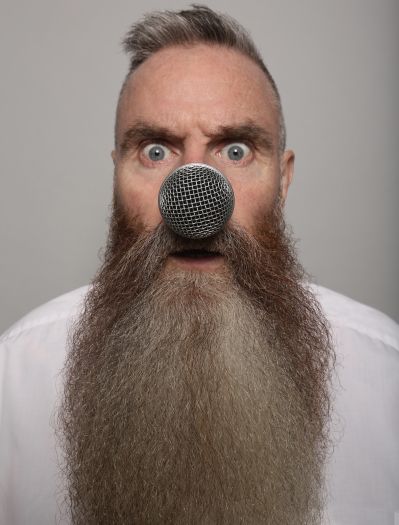 Find Martin Mor on the web -

I never, ever read reviews. The dog does not care about the opinion of the fleas.