Power balances are shifting and schisms are deepening. But power corrupts, so just shifting who has the power isn’t going to change anything. There are so many arsebiscuits in the world, and we seem to be incredibly determined to let history, no matter how horrendous, repeat itself. This show is my take on whether we can find a way to co-exist. It’s hard when the people we love are across the political and/or ethical divide. Where do we draw our lines? And how do we get rid of all the arsebiscuits, without becoming arsebiscuits ourselves?
I’ve probably said ‘arsebiscuits’ too many times now.

The idea of doing comedy slightly terrified me, so I thought I’d give it a go. I did a course with Tony Allen, and at the end of if, we all had to do 5 minutes in a pub in North London- I can’t remember its name. As soon as I got on the stage, I felt like I was home. It was exhilarating and so much fun. I knew I was going to be doing it for the foreseeable future.

Recently, a punter came up to me and said ‘That was great. It’s like Alexei Sayle became an Indian woman.’ That’s a pretty good review, given that Alexei Sayle is one of my comedy heroes. But it’s also a terrible review, mainly for Alexei Sayle.

The reviews are not for my benefit – they are to let punters know if it’s the kind of show they want to see. I will go through them at some point, in order to pull quotes for future marketing. If there is a particularly good one, I may use it during the Fringe to put out on Twitter or something, to encourage people to come to the show. I’m hoping the show will sell out, and I won’t have to. (I probably will have to).

They’re doing their job- some better than others. Much like the performers.

I’m guessing if he was convicted, he broke the law. Is he really a comedian? That description makes him sound like a bit of an unfunny, tone-deaf twat.

Certainly. Comedy is about pushing boundaries, and sometimes you have to push too far to find where the hard line is. But you have to earn the audience’s trust before you do that. They need to know who you are and where you are coming from, so they can trust your intent. And sometimes, you have to let your favourite joke go. You have a lot of power up on that stage- you can’t abuse it. Well, you can, but then you just end up being an unfunny, tone deaf twat.

There have been so many, it’s hard to choose one. The most recent one was probably a gig I did at Union Chapel- such a fabulous venue, with a great line-up and incredibly generous audience. It was Guilty Feminist- Comics for Calais, fundraising for Help Refugees. It’s a great charity- check them out on line, and get involved if you can.

Find Sameena Zehra on the web - 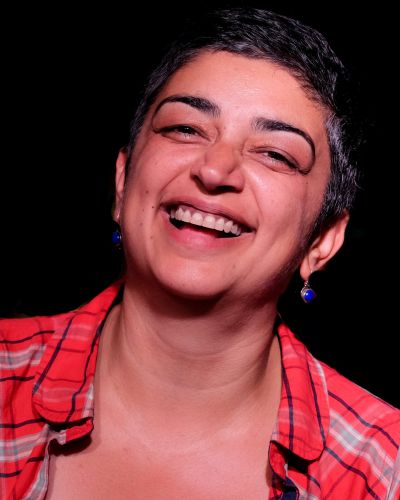 Find Sameena Zehra on the web -

Recently, a punter came up to me and said ‘That was great. It’s like Alexei Sayle became an Indian woman.’ That’s a pretty good review, given that Alexei Sayle is one of my comedy heroes. But it’s also a terrible review, mainly for Alexei Sayle.