Martin Walker writes: “Aaron Ayjay: Twisted was performed in one of the smallest rooms in Edinburgh. I hadn’t come across Ayjay and his guitar before, but I’ll be looking out for him on the circuit from now on. His lyrics are certainly outrageous, but they are also carefully and intelligently crafted comedy songs that invariably have more in them than first appears. Whereas other comics might use filth as cover for their lack of anything of substance to say, Ayjay has a lot to say, he simply has a warped way of saying (singing) it. A great stage presence, he performs with a twinkle in his eye and twisted on his lips. Ajay tours extensively in Australia and the UK. Look out for him, he’s a five-star showman.”

It’s me and my guitar and some “twisted songs” and a bit of stand-up banter in between.

A twisted view of the world through song and stand up comedy. My energetic and aggressive musical comedy is peppered with expletives with very dark-humoured undertones. Be it about an ex-girlfriend, ex-wife or an overfriendly pet who views a human leg as fair game, my songs start with a basic theme, escalating quickly into the ridiculous, leaving the audience wondering “who the hell pulled the rug out from under his feet at certain times in his life”.

I woke up one morning during my first year of a two-year sabbatical with a burning urge to get on stage and do stand-up. So I immediately did a Google search for comedy nights whilst still in a sleepy daze and sent out a few emails.

Three days later I was a last minute fill-in due to a drop-out spot on one of London’s many Open Mic nights….and discovered the phrase “it’s a bringer”…which to most comedians is a phrase they’d least like to hear next to “You have Chlamydia”.

I hadn’t figured out who I was as a comedian and didn’t really have it all together. I just wanted to get up and make people laugh.

I didn’t even play guitar back then during a set. It was a bit of politics and observation emulating some comedians I admired such as Stephen Colbert, Bill Maher, Jon Stewart, Jim Jefferies, Jerry Seinfeld, Louis C.K (or “he who shall not be named” these days) and so on.

So, I get to the venue, it’s dark and surrounded by a couple of “bringers”, my name was called and I alighted stage, shook the MC’s hand, and grabbed the microphone.

I paused and briefly peered into the audience that was dispersed amongst the hastily organised chairs and the ebbing darkness that stretched to the back of the room, then nervously uttered the first line of my set.

My bringers and others laughed, mostly. Well, they wouldn’t laugh at everything, but for the majority of the laughs I’m thinking…

And then at that point, I caught the comedy bug. “Let’s do it again and make them laugh again!”

Looking back, my material was a bit tame. Safe stuff. I wouldn’t even do that stuff these days. It’s not me. It’s someone else. Maybe a pastiche of all the comedians I admired.

I was trying to please everyone in the room and not put myself out there with my vulnerabilities and insecurities and take topics of stand-up or song from the sublime to the ridiculous.

But like getting your nipples pierced, you either roll with it or just want it removed.

And that’s me in a nutshell as a comedian.

Clean stage clothes and men’s accessories. All must be right if not the Earth will open and swallow me up.

“One to Watch” – City Weekly

Of course, I will read the review. That’s if anyone can be bothered to review it. I’ll take anything.

In the US, this would be covered under the First Amendment.

In the UK, well, maybe a bit harsh but idiots like this will go to the extreme to get their YouTube views up. But suffer the consequences. Like the kid who filled those Oreos with toothpaste and gave them to the homeless guy.

Expect the consequences if you want to be a bit of a dick.

Define “what is too far”?

I think my stuff pushes the boundaries of what some people would call “safe comedy”.

You either like it or as I’ve seen many times, people shake their heads, get up and leave whilst others are sitting there in side-splitting laughter.

Last year playing to an audience of about 350 or so in arena style set up. Everything went right. The crowd warmed up very quickly to my stuff and enjoyed it with some seeing me on the street later and stopping to congratulate me. I was on a high for a day or two after that.

Find Aaron Ayjay on the web - 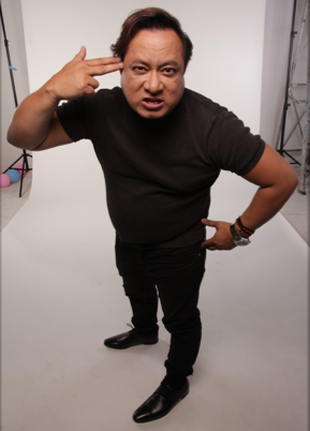 Find Aaron Ayjay on the web -

Of course, I will read the review. That’s if anyone can be bothered to review it. I’ll take anything.