It’s an hour of stand-up comedy about the chip on your shoulder you get when you’re from a working class background and how the attitudes & attributes that chip gives you, can help you to become undeniably good at whatever it is you focus on. Loosely, anyway. I think it’s always more important to be as funny as possible than to try and stick to a theme, so I’m just trying to write a show that’s funnier than last year.

It was in a nightclub the size of an aircraft hangar, was attended by 32 people, 28 of which were friends that had come with me and 2 of the other four were hungarian tourists who didn’t have a clue what the hell was going on. At the time I thought it’d gone well, but I watched the video of it back last year and had to be talked out of overdosing afterwards. It’s horrendous. OH GOD, this is what I imagine it’s like when a Vietnam veteran has a flashback.

No and it freaks me out when comics do have them. Before going on stage is chill time, the last thing you want is someone you’re working with doing vocal warm-ups in the green room mirror. I mean, if you’re a musical act fair enough, but other than that – what the f**k are you doing? Sit down, you lunatic.

Best review; this was last year in The List. They gave me four stars and the quote “Narcissism, bullying and sausage rolls”, which was such a perfect summation of last year’s show.

Worst review; this was during my debut year of 2016. Three Weeks sent some ‘offended by everything’ student to review me and she just didn’t understand comedy. One line from it was “Adam Rowe used his own weight to justify a fat phobic routine” – I mean, how dare I!? I’m a fat man, but that gives me no right to talk about what it’s like to be a fat man, unless I have a meeting with the Fat People’s International Council and clear my opinions with them. I should have known better.

If a reviewer doesn’t understand the basic concept of self deprecation, they shouldn’t be reviewing comedy at the biggest arts festival in the world. P.S. Italics represent a sarcastic voice.

Yes. Despite what might come across from the above rant, I think reviews can be very useful. A good one can fill you with confidence, which adds to performance levels. A bad one can help you improve the show going forward. As long as the criticism is constructive and not just “well, everyone was laughing, but I didn’t like it.” stretched out into four to eight paragraphs.

I think they’re like Premier League referees. They do a very difficult job, they aren’t always right & they probably wish they were playing the game instead of judging it. If they judge in favour of your team, you’re more likely to think they’re alright and if they give a penalty against your side, you’re going to call them bad things until the day comes they finally judge something in your favour. Now they’re a good referee all of a sudden.

No, I absolutely do not. Context is everything. I think he’s an absolute moron, but I don’t think he’s a criminal… well, not for the content of that video anyway. Who knows what he’s up to in his spare time?

No. Any subject is suitable for comedy or comment on. You’re free to make any joke you like, but you also have to deal with consequences of your actions. It’s also all about the target of the joke, not the subject. You want to do a joke about Hillsborough in Liverpool? A joke about Grenfell in South East London? Where the victims are the butt of the joke? Go ahead, but I’d have the engine running if I were you.

However if you want to do a joke about the authorities or the government and the way they acted in those two tragedies, then you’ll probably get a rapturous round of applause. Again, context is everything.

I don’t think so. I’m not proud of some of the jokes I made early on in my ‘career’, which had sexist/ misogynistic attitudes or boring old stereotypes, but I wasn’t really educated on those subjects, the way I am now, back then. There’s actually parts of my show this year that look at this exact topic.

Liverpool Comedian of the Year Final 2011. It was contested between me and 5 of my mates who started around the same time as me, we all had an absolutely brilliant night and the audience were great. OH YEAH! And I won… which I supposed helped it become a decent memory.

Find Adam Rowe on the web - 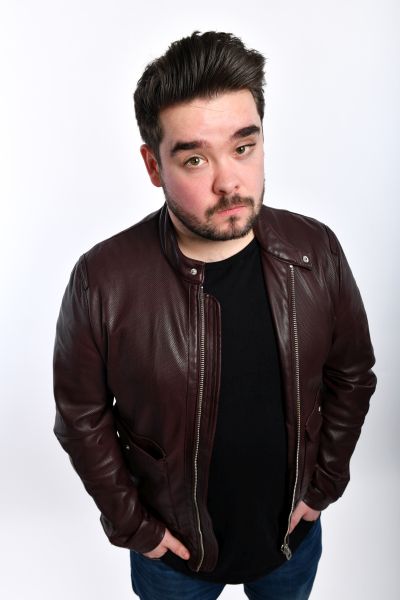 Find Adam Rowe on the web -

If a reviewer doesn’t understand the basic concept of self deprecation, they shouldn’t be reviewing comedy at the biggest arts festival in the world.