My show is called Sheep and it is my debut hour. The show is about individuality, making friends and all things sheep. I also love one-liners so my show will have loads of gags and silliness. It’s at The Caves at 4.10pm 2nd-26th August (not 13th) and everyone is very, very welcome.

My first gig was an open mic in Leamington Spa, famed for its bustling comedy scene. The audience was mostly students and I opened with a joke about how my first name sounds like a computer. I also had a routine about pound shops that ended up with me crying in a flat full of condoms and milk. The audience were very lovely and I left the stage after about 3 and a half minutes pretty sure I was the best comedian to ever live.

Whenever I have a big gig I wear superhero socks.

My best review was probably in the Leicester Mercury after the UK Pun Championships. They quoted a really silly joke I did about Stormzy and said nice things. Also the picture they used was very cool because the gig was in a boxing ring, it’s the most rock and roll I’ve ever looked. My worst review was for a podcast I helped out with at the fringe in 2014; it was 3 guys and then I turned up halfway through and started talking about horses. It was odd. The two reviewers in the audience were the only ones in that day, an awkward time for all involved.

I don’t want to read my reviews but I have terrible self-control so I’m sure I’ll end up knee deep in reviews and ice cream by the end of week one.

I think every reviewer is a special individual flower, with a kind soul and their own unique voice Although there is sometimes a lull about 3/4 of the way through a conversation with them. 4 stars.

Yes, he did. He got convicted and I trust that that judge knows the law better than me.

If my parents reactions are anything to go by then my family, sex, drugs and anything that includes the word fuck should be off limits.

One time I drove a 7 hour round trip for an unpaid 5 minute open spot.

When I got to gig with Daniel Kitson at Up the Creek in London. I was at a great club with an act that I have long admired and who is so revered within the industry, it was amazing and really made me feel like I was a proper comedian.

Find Adele Cliff on the web - 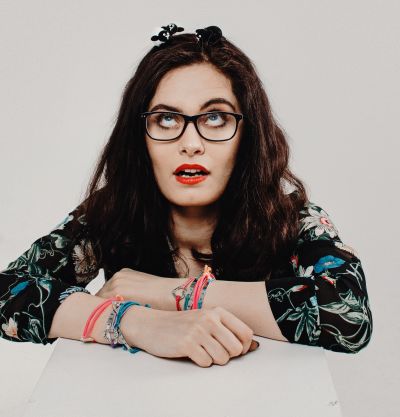 Find Adele Cliff on the web -

I think every reviewer is a special individual flower, with a kind soul and their own unique voice Although there is sometimes a lull about 3/4 of the way through a conversation with them. 4 stars.