I am completing this Q&A in May… so at this stage your guess is as good as mine. My Edinburgh shows don’t tend to be heavily themed as I find that gets rather grating by the end of a long run. It will be a collection of stories and ideas and a montage of horrific selfies. Two years ago, I finished the show with a montage of pictures of stuff left by bins. It was a lot more fun than it sounds which is also what I hope I can say about this show.

It was a hot August night in a very stuffy, smoking cellar room of a pub in North London. It was a new act night and there were about 15 acts on and roughly 10 punters in the audience. I was beside myself with fear and excitement. My material was dreadful but my commitment to it was admirable. In my memory it I went well. Whether or not this is false memory recall I don’t know but I do know I left that gig and decided there and then that I was going to be a comic.

I pace a lot. Over the years I have had various lucky charms that I have kept in my pockets but I always end up losing them and I get stressed out for a bit about being without them. So I have stopped having trinkets, they all leave you in the end.

I once got a review in a broad sheet newspaper in Australia that was so gushing I was slightly embarrassed. All I thought was the woman who wrote it needs to get out more, the show was good but not deserving of the lavish praise she was bestowing upon it. One year I got a two star from the List that read like a one star. They hated me with real zeal.

Every year I say I won’t, I don’t actively seek them out but sometimes you can’t help but see them. I think it can be helpful to read them after the festival because if you are going to use the good ones perhaps there is something to learn from the negative ones. Sometimes people just hate your face and the fact that you are talking.

They have neither made or broken me so I am somewhat in different to my own reviews. Having said that I don’t think that I am the only comic that enjoys the schadenfreude of reading other comics less than flattering reviews. Its sick I know, but it helps you get through the bloody month.

He is not guilty of a criminal offence in my eyes. He is guilty of being a massive bell-end but you can’t legislate against that. I am a very strong believer in freedom of speech even if it means on occasion you have to listen to some utter hateful shit.

I don’t think so but there are definitely some comedians not suitable for certain subjects. I am including myself in that statement. At times there are things I really want to talk about but my lack of being able to succinctly and eloquently capture the idea without sounding like a dick make me slam into reverse. Nothing is off limits, but know your own limits.

Subject wise… no…road wise yes. Southport, its fucking miles away. Don’t put South in the name if you are clearly half way up the sodding country.

My first one. I finally, at the age of 29, felt like I had the possibility of doing something with my life.

Find Zoe Lyons on the web - 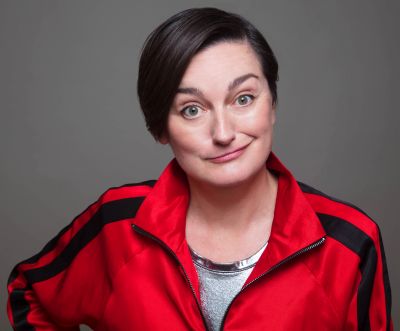 Find Zoe Lyons on the web -

I don’t think that I am the only comic that enjoys the schadenfreude of reading other comics less than flattering reviews. Its sick I know, but it helps you get through the bloody month.