This is my debut hour at the Fringe and I’m really excited. The show is about the fact that I’m the bisexual, OCD, daughter of an Irish Catholic deacon and how I figured that out and have dealt with it since.

My first gig was at the Cavendish arms in Stockwell, London at a gig called Comedy Virgins. It was much better than losing my actual virginity. I brought about 74 friends which gave me a hugely inflated sense of my own ability that was exposed very clearly at my next few gigs.

Does thinking about how I should have married for money count?

I’ve not been going that long so I haven’t had that many reviews yet. Chortle and Beyond the Joke have so far been kind to me in their reviews of the few comedy competition finals I’ve made but it’s easy to hide when you’re only doing five minutes. My worst review? To be honest, I’m probably my own worst critic so I can’t see anyone else being as harsh as I am about my stuff. (I’ve immediately panicked that I absolutely will and when the day comes I’ll be out looking for a rich wife)

My feeling is that reviews aren’t really for comics, they’re for the audience to get a sense of whether or not a show is for them. I’m sure I’ll be told how they’re going but I might wait until September for full on self-flagellation.

I heard Maria Bamford on ComComPod talking about how unique and wonderful a thing it is to have someone listen to and then think about and then formulate and articulate their thoughts about your show and so that’s how I’m going to try to think about them, as useful. If they’re good. And if I agree. And so long as I’m not already having a bad day.

Well yes, he was convicted and the judge in his case probably knows more about the law than I do.

Did he do something funny? I don’t think so.

Super weird? Oh yeah, for sure.

Do I hope his girlfriend took her pug and played Beyonce’s Irreplaceable when he got home from court? Absolutely.

My feeling is to stick to what you know, then you can be sure it’s funny, important and appropriate that you’re the one saying it.

Yeah, in my teens I was weight obsessed and definitely lost too much.

I’ve been going for three and a half years which in comedy is barely a probation period. I really hope I haven’t had the gig of my career yet!

Find Catherine Bohart on the web - 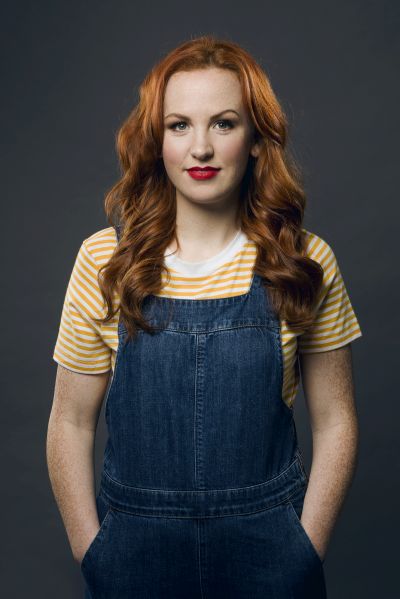 Find Catherine Bohart on the web -

My feeling is that reviews aren’t really for comics, they’re for the audience to get a sense of whether or not a show is for them. I’m sure I’ll be told how they’re going but I might wait until September for full on self-flagellation.