This year’s show is about the current political landscape. I’ve got stats and facts which right wingers hate because they tend to have an annoying liberal bias but I’m not just Nazi bashing. I’m slagging everyone and I’ve mapped the political landscape. From the moral high grounds to the heights of peak idiot. It’ll offend everyone. Which isn’t hard these days. I’ve spent the last 10 years analysing the political landscape if you’re confused about what’s going on. You’re not the only one. I have no idea either. Joking. I do. I do and its hilarious. I’ve hardly had to do any work to make it funny.

Was for Tony Allen the Godfather of Alternative Comedy adopted me and took me uber his wing. (The left one, obviously)

I drink the blood of a comedy virgin

Finest comedy sticks of dynamite to be found for love or a suggested donation. (ScotsGay.) And from the same show….

The performer was earnest but this wasn’t funny even if I was drunk. Some people just need therapy.

I really fancy reviewers, especially if they give me good review. I’ve always found you attractive Wrigley. Haven’t I told you that already?

As the old adage goes If you’re going to be a cunt. Be a funny cunt. If Hitler had had a better routine at Nuremburg would history have judged him more kindly? Was the pug guy actually promoting racial hatred? If so does doing it in a funny way make it more acceptable. The answers to these questions and more won’t be in my show.

I fell asleep on a night bus once. Is that what you mean.

Getting high fived by a stag party after doing ‘feminist’ jokes. That’s another tick on the bucket list. My life goals could be most kindly described as ‘eccentric’

Find Becky Fury on the web - 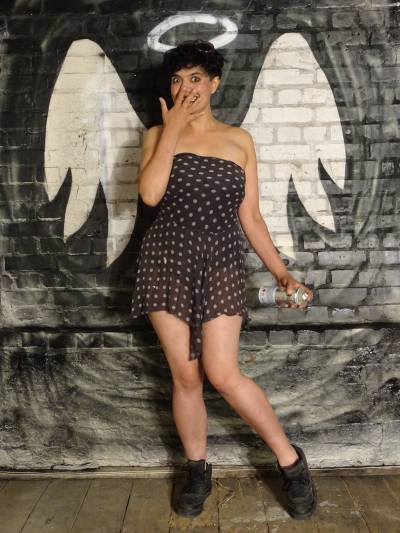 Find Becky Fury on the web -

I really fancy reviewers, especially if they give me good review. I’ve always found you attractive Wrigley. Haven’t I told you that already?