My show is about me and how my life has changed from my small town working class upbringing to a liberal life in the big city. It also looks at how I might seem to have a very different life to my parents, enduring 9 course tasting menus, hot yoga, having a dishwasher and a tumble drier but how different is my life really? And when your parents’ attitudes start influencing your outlook on life do you fight against them? Not always.

My first gig was to 300 people at the Brighton Komedia having completed Jill Edwards’ standup comedy course. It was a showcase at the end of the course and the most exciting night with a massively warm, friendly and sympathetic audience. My second gig was in a pub basement to 3 people and was a huge reality check.

My only ritual is to never drink alcohol just on the off chance it makes me think I’m a comedy god when the reality would more likely be a fat, bald Northerner rambling on about how he never got to fly Concorde or be a Blue Peter presenter.

There are two equal best reviews and they were in the Scotsman and the Herald when I did my first solo show in 2016. In my eyes they were the classic 3 stars but read like a 4. The worst review I’ve blocked out because it made me feel so depressed at the time.

Lots of people say never read reviews, so I obviously do. I’m not sure if it makes it worse if they’re bad or not as I’m always nervous knowing I’ve had a reviewer in. Also, there’ll always be someone who says “Oh I see you got a review in X” then gives you the Princess Diana sympathy head tilt.

Reviewers terrify me, they unsettle me and I always think if only they’d come the night before or three nights later and were invisible it would have been brilliant.

I don’t think he did because I don’t think the intent was to cause offense on a large scale. It’s a strange thing to train a dog to do but it’s more ridiculous than it is offensive.

It depends how they’re handled, what the intent is behind joking about certain subjects and who is talking about them. It’s often argued people from related backgrounds or experiences can talk about their life experience and others shouldn’t and I agree with that. I do think there’s humour in virtually everything it just takes a clever joke to get a laugh.

I’ve never gone too far. I didn’t get into comedy to shock people, well maybe that I’m doing it in the first place, but instead to try and make people laugh.

Being in the final of the BBC New Comedy Award was incredibly special although it didn’t feel like a gig as it was a competition. The best regular gig was at the Edinburgh Fringe in 2016 when I was part of the line up on a Radio 4 Best of the Fringe show hosted by Zoe Lyons. It was in front of a studio audience of about 400 people and then broadcast on Radio 4.

Find Russ Peers on the web - 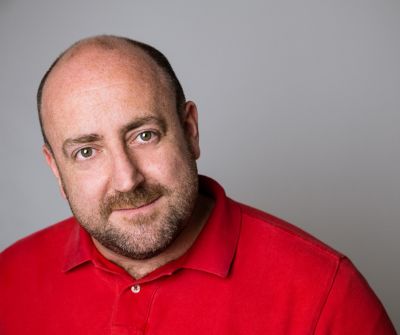 Find Russ Peers on the web -

Lots of people say never read reviews, so I obviously do. I’m not sure if it makes it worse if they’re bad or not as I’m always nervous knowing I’ve had a reviewer in. Also, there’ll always be someone who says “Oh I see you got a review in X” then gives you the Princess Diana sympathy head tilt.