It is called ‘The Opinionater’. I am celebrating the fact that we live in the age of opinion now. Nobody needs facts anymore. Just opinions and lots on them please. Just some jumped up little shit standing on stage and pontificating for an hour. Who wouldn’t want to watch that?

It was at the Comedy Brewhouse in Islington. I didn’t know what I was doing which is the best way to do anything new, including a presidency. I had no jokes just an impression of Alec Guinness. Somehow I fluked it and thought it was easy. I have been chasing that initial high ever since.

I get angry at somebody in my head just to give me the impetus – usually a dead relative but sometimes an alive ex-girlfriend or George Galloway.

I like good reviews the best, the five star ones, and especially ones with loads of superlatives: amazing, stupendous, mesmerising, flawless, debonair, best Prime Minister this country never had, The Thin White Duke etc. As for the bad reviews I like ones that not only eviscerate the act but conduct a full on character assassination and really get at the heart of the problem. You know the kind of thing? Despondent, cry for help, emotional and spiritual mutilation, impotent, anger management issues, wouldn’t have your back in a crisis, slouches, Neville Chamberlain etc

Yes I like to read them all in a oner on the last day. All the good and the bad together, all the praise and the criticism, all the elation and all the pain. You feel everything at once. Like eating an Easter egg with broccoli. And for a moment I feel so alive.

In general I support the idea of everybody going about criticising everyone else all the time. It is very important. I can’t remember why? I think it is something to do with preventing the next Hitler. So I am in favour of critics but perhaps they shouldn’t sleep with comedians.

I think the culpability lies with the dog and it should have been put down or given life in prison like Rudolf Hess. Likewise Hitler’s Alsatian dog gets off lightly but I don’t remember it objecting to the Holocaust at the time.

Yes, World War 2 specifically the North African campaign. Don’t get me started. If I hear one more battle of El Alamein routine- Jesus!

Lord yes. But as my Dad used to say. It’s art Stephen, what does it matter? Can’t you get a proper job? Stop crying. God what has happened to the manufacturing base in this country?

I don’t like best gigs because then it raises the bar and you have to retrospectively downgrade all your previous gigs. So things are getting better and better but it is getting harder and harder. It is a like being a top athlete or the opposite of Presidents of South Africa.

Find Stephen Carlin on the web - 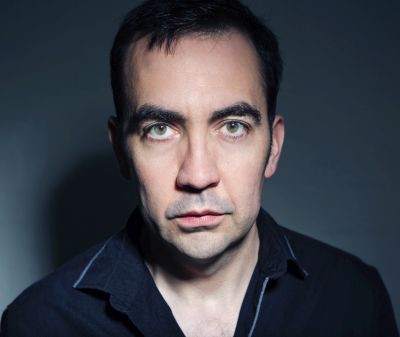 Find Stephen Carlin on the web -

In general I support the idea of everybody going about criticising everyone else all the time. It is very important. I can’t remember why? I think it is something to do with preventing the next Hitler.