Hi Wrigley. Well, it’s called ’75 and looks at the story of how we went into Europe in the 70s as a means of understanding what’s going on these days. It’s my first attempt to do something in any way political, and the only way I can manage that is to look at it from a distance of forty years or so. I’m a bit of a fence-sitter and over-muller.

I did a one-man routine of ‘The Six O’Clock News’ aged eleven at the high school talent show. My Moira Stuart was light on gags, but my Tony Blair and William Hague went down a treat, as did my biting satire of the weather in Britain always being terrible. I even said the word ‘bloody’ and felt the electric thrill of transgression.

Pretty standard stuff, all told. I go over the first ten minutes of the show again and again, more to distract me from my nerves than anything else. I like to touch all four walls of the dressing room before I go out, but if I wasn’t allowed to do that for some reason (hygiene?) I wouldn’t mind. The main thing is doing lots of thorough preparation at home, isn’t it? Boring!

The best one was a one-star from one4review.co.uk, when I was a student. Admirably honest, the reviewer began by saying that they didn’t really like student sketch shows, and the rest of the review bore that out. ‘Against my better judgement I went. Mistake.’ A fan of the one-word sentence, the writer concluded: ‘Avoid.’ I say it’s the best because I think if you’re going to be remotely creative it’s a good idea to experience someone who really hates you and thinks you’re terrible – it’s humbling and provides an excellent marker of subsequent progress.

The worst was an unaccountably mean one from the Mirror a few years ago where the main objection was that ‘the crowd was loving him.’ The review ended with the words ‘go away’, which no-one wants to read in week one.

The good ones are an endangered species. It’s easy to gripe about them but the collapse of print media means that newspapers are looking to make cuts wherever they can, and a highly-experienced comedy reviewer is seen as a bit of a frivolous expenditure, which is a great shame as everyone wants to be written about by someone who likes and understands comedy, who has seen more of it than them. There’s a few veterans sticking it out but many have had to move on, and in their place blooms a plethora of have-a-go heroes who often get completely the wrong end of the stick or write things like ‘Parts of it were a bit boring, but other parts really had lots of jokes and laughs.’ This helps no-one.

Oh crumbs, Wrigley, talk about a gear shift! I’d like to start by referring you to my previous comments about being an over-muller. I guess by pedantic legal definition, if he was convicted of a criminal offence then he committed a criminal offence. However, I would say that I have not watched the video, looked into the man and his other work and context or fully digested the various interpretations of his actions and the wider ramifications of the case. As such, I’m not sure how helpful it is for me to offer a glib opinion one way or the other about something of which I have insufficient knowledge. From what I have heard of the video it sounds very nasty and a long way from my cup of tea, but I leave it to people with a better understanding to reach their own judgement. Now, let’s get back to questions about my favourite showbiz memories, eh?

Wrigley, Wrigley, what are you doing to me?! I think not, really. If you consider the totality of existence as broadly meaningless, as I do, then the whole universe is a vast joke. As it says in Genesis 3:19: ‘dust thou art, and unto dust shalt thou return.’, something I think applies not just to people but to the Earth, Sun, Stars. So, the idea of human achievement is, in itself, very stupid. What it then comes down to is the manner in which you approach a subject for comedy: in a way that sets out to cause unnecessary pain, or in a way that provides some form of joy? If there’s enough suffering in the world as is, I think the purpose of comedy should be to alleviate and enlighten rather than simply to add to it. Of course, it’s not a foolproof approach.

Oh, when I was a student I was in this student sketch show we did all sorts of horrible sketches because we were 19 and were excited at the prospect of being able to say rude and shocking things on stage. Avoid.

Ah, now that’s more like it, Wrigley! A little treat at the end. Well, it would probably be going back to the high school talent show four years after my initial victory and winning it again, Moira Stuart now replaced with a stonking Huw Edwards and with the very naughty addition of lots of impressions of the teachers. It felt like this was definitely going to be my job and I was more excited than I can describe. Now Wrigley, I really must be going! This new show’s a stinker, you know.

Find Kieran Hodgson on the web - 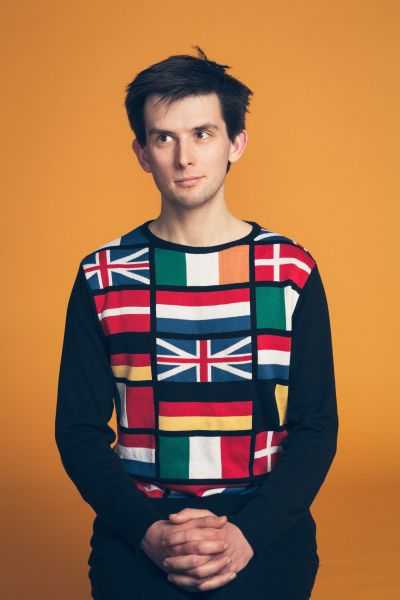 Find Kieran Hodgson on the web -

The best one was a one-star from one4review.co.uk, when I was a student. Admirably honest, the reviewer began by saying that they didn’t really like student sketch shows, and the rest of the review bore that out. ‘Against my better judgement I went. Mistake.’ A fan of the one-word sentence, the writer concluded: ‘Avoid.’