Pulling it Together is a bit like Humpty Dumpty, but with a happier ending. It’s about rebuilding myself after a breakdown which happened four years ago after my Dad died. It’s both a personal and political story as I had to fight to get my needs met a number of times. It highlights the effects of austerity and how social stigma is still very real. I hope to inspire others to believe they can get better despite odds often being stacked against us.

Things can also get better. There are lots of lovely caring people out there advocating for us nutters. When I got sectioned, I phoned my cousin Mark Thomas, who I greatly respect and look up to. When he asked me what I wanted I screamed “FREEDOM!!!” He told me “Things get better.” I believed him, and they did. Mental health is extremely important. I’ve lost two good friends in the last couple of years who both had a diagnosis similar to mine. Tom Palmer and Sarah Munro. They were both young. 28 and 36. I believe had their lives not been so difficult due to austerity and stigma from society they would still be with us.

My other show Conscious Comedy is a mixed bill of socially conscious comedians. I intend to create a sacred space by invoking the energy of Hindu God Shiva, to destroy the unjust restrictions placed on comedy and transform the industry in order to save art! Lofty ideals but I’ll probably just get taken down with an accusation of cultural appropriation. Seriously, I believe comic license gives us agency to joke about anything. Context is important of course, hence the conscious bit. I’m aiming to give people a platform who have an important messages, personal or political within there shows. I’m interested in the truth, not what views are currently in vogue.

It was lovely. I did a comedy course at City Lit with Rob Hitchmough. Yuriko Kotani was also in my class. I chose City Lit as they offer concessions for people on low income. I had previously done an acting course there, where a fellow student invited me to audition for the play that brought me to the Edinburgh fringe for the first time in 2013. Rob organised a showcase for us at The Comedy Pub in Piccadilly Circus, it was an audience full of our friends and family so was a very supportive atmosphere. I was still bricking it though and had to have 3 glasses of wine to muster the courage to get up there.

I usually have one drink, which I take onstage. A pint of lager, and I do 7 / 11 breathing in the yogic power pose. I also tend to go over my lines, because my memory is not as good as it was before my breakdown but it’s got a lot better.

The worst one, was the first one I ever got as a comedian. My first hour was called Consume Shit & Die. It was described in the brochure as shock comedy and that is exactly what I delivered, at one point putting a condom on my vibrator using my gob, then flashing my grey murkin to the room in the character of a sex addicted granny, before finally whipping my tits out as I cried for revolution. I got a one star from a young lady from Broadway Baby! She completely dismissed me as a comedian, saying she thought I should find a different platform. I felt it was unfair and misrepresented my show and it’s message. I just don’t have it in me to be unjustifiably cruel to people. I called the reviewer a bitch on twitter, and later in an interview, a snotty nosed brat. Some people liked that show, it wasn’t her cup of tea, but others laughed throughout. I felt she was just cruel to dismiss it completely.

I’m proud of the 4 star review I got last year for Back 2 Basics but my favourite review was also from Broadway Baby, Paul Cockburn. He came to see Sextremist. It was my first review since the one that traumatised me and his 3 stars felt like 5. I cried tears of relief. 3 stars meant I was good enough. Something to build on. Giving me the strength to carry on. I’ll be forever grateful to Cockburn.

I’m not inviting reviewers to my work in progress obviously but if I get one for Conscious Comedy I will be grateful for the feedback as long as it’s not written by an ideological student. The tagline is ‘A sacred space, no a safe space.’ Students seem to be all about safe spaces, so I’m hoping that will scare off the weaker ones.

During Sextremist I would freeze if I knew there was a reviewer in the room. The trauma inflicted by Broadway Baby had left me with a complex. It affected my performance, knowing I was going to be judged. It got easier throughout the run then, after 2 sessions of hypnosis and conversations with the fair minded Geoff from One4Review, inspiring Kate Copstick from The Scotsman and words of encouragement from Fringepig’s Martin Walker, who’d previously worked with the offending publication. I am now at peace with critics, both inner and outer.

Absolutely not! The comedic context with the intent of pissing off his girlfriend was crystal clear. Hence why there were no complaints from the public. This was an act of state authoritarianism and for once we actually should all be outraged. Last year I combined my Free the Nipple rally with a free speech rally, it was the lowest turnout ever. I think people are scared to advocate for free speech because they think it’s associated with the far right, but it transcends the duality of left and right.

Free Speech is the bedrock of democracy and without it we will all end up living under tyranny.

No. We can laugh and joke about anything. Context is important to write good jokes but even bad jokes shouldn’t be punished, we need room to fail. That’s how we get better as comedians and as people in general. It builds resilience. Condemnation doesn’t help anyone. Humour is a force for good. Even if the jokes are dark. Laughter is like an internal massage, relieving the tension in our souls. Who doesn’t love a massage? Maybe authoritarians. I bet they also have really boring sex.

I’ve never intended harm. Some would say I have. I stuck tiny #freethenipple stickers on posters one year and a couple of comics were very angry with me for that (not even their posters!) The stickers peeled off without marks so I knew I had done no real damage.

In retrospect, calling that Broadway Baby reviewer a bitch on twitter was wrong. Her name’s Katie Rose (ironically also the name of one of my best friends, it wasn’t her!) Probably wasn’t the best way to express my anger, I’ve learned to be more assertive rather than aggressive since. Thanks to our NHS for the psychoanalytic therapy and to Walsall Council for granting me a personal budget to pay for stuff like kickboxing and yoga. Personal budgets are great, my mom learned about them from the Mind website. It enables me to stay well and seek treatment for my Bipolar symptoms on my own terms. I’ll be talking more about stuff like that in my work in progress show, Pulling it Together.

I’ve had some amazing gigs, like the time when my entire audience joined me in topless solidarity, all 4 of them. And performing Back 2 Basic which was a tribute to my friend Tom in front of his lovely mom Judy and brave brother Chris. It was tough but also healing for us. Tom’s anarchic warrior spirit lives on the hearts of those who loved him. My favourite gig this year was the We Are Funny Project’s Feminist Talking Points. There was an atmosphere of contained anarchy that you couldn’t recreate that night. The gig had been previously shut down, likely due to a rally cry from the hysterical Kate Smurthwaite. Feminism seems to be one of those subjects people feel like they can’t criticise or take the piss out of. Like I said, I believe we can laugh about anything, as the great Jordan B Peterson would say, fighting with words prevents us from fighting with our fists.

Find Samantha Pressdee on the web - 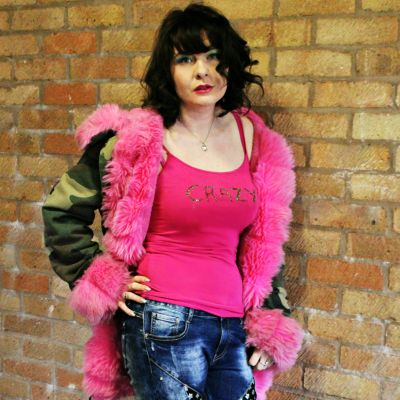 Find Samantha Pressdee on the web -

I called the reviewer a bitch on twitter, and later in an interview, a snotty nosed brat. Some people liked that show, it wasn’t her cup of tea, but others laughed throughout. I felt she was just cruel to dismiss it completely.