10,000 Decisions is about how we make decisions. I overanalyse everything in life. And I make bad decisions. The show goes quite in depth investigating why we make the decisions we do, looking at how my parents have influenced me, but also how our brain makes decisions.

My first gig was a comedy course graduation, so luckily, we had an amazingly supportive crowd. Having said that, a friend of mine unintentionally heckled me; I handled it well. For a while I had a view that the gig was great – and it was – but recently watched the video of it. I looked so uncomfortable!

If I can, I like to listen to hip-hop, or Sean Paul. I love Sean Paul (are you reading this, Sean? I love you.). It used to be a hard ritual but not as much anymore.

There have been a few really great ones (Voice Magazine gave me 5 stars for a show I hosted), but the ‘reviews’ that mean the most are from people. Its nice when people come up and say ‘this was the best show I have seen all Fringe’. Once I had a girl come up to me and say ‘It’s like you are me. You are in my mind.’

My worst review, though, was when I was in the Bath New Act Competition Finals, 2012. I had only been going 3 months and only had 7 minutes of material, all about sex. The finals were in Bath on a Sunday afternoon…this was not what they wanted. The reviewer did not mention my name, but it was clear he was referencing me when he described my set as ‘a spectacularly obscene rant about my genitals’.

Yes, I plan on reading my reviews. It’s a tough call. I think some critics can have great points. It is not to say I would change my set for a review – definitely not – but they can be helpful. Plus, I am too curious to not read them!

I don’t think I can generalise. Most of the ones I know personally, are fair. However, I am sure there are reviewers out there trying to be as harsh as possible.

I do not know if it was a criminal offense. There are a lot of technicalities around the law. While we have a freedom of speech, we do not have that freedom when it comes to threats and abuse. As such, this comes down to the interpretation of the words and actions. I am not qualified to argue on either side. Would I have done it? No. Did I find it funny? No. But that is not the question.

No subject is off limits in comedy. You just need to ask: who is the victim of the joke. As long as the humour comes from a good place, everything is fair game. Comedy = Tragedy + Time, right?

I did a 30-minute show about bereavement after my partner passed away suddenly. It wasn’t too far. However, it took work to get the right tone.

I genuinely don’t know what my best gig was. We all have gigs where you smash it and leave feeling like a god. But there are also the gigs that mean more like doing my bereavement show at the AGM for a Charity called Widowed and Young or doing my current show (which has traces of neuroscience and philosophy) at a Philosophy Festival. Finally, then there are the gigs that are pure challenge, like improv shows or even showing up to a corner of a pub and through my MCing, turning a non-gig into a lovely gig. I could give you a top 20, but not a single gig.

Find Robyn Perkins on the web - 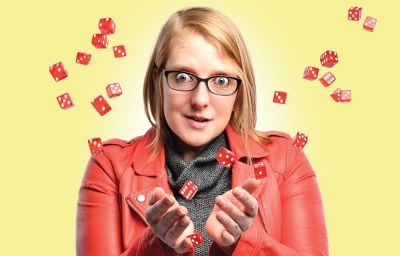 Find Robyn Perkins on the web -

I plan on reading my reviews. It’s a tough call. I think some critics can have great points. It is not to say I would change my set for a review – definitely not – but they can be helpful. Plus, I am too curious to not read them!