A Piggy Interview WithAlice Frick (…What the Frick?!)

A request for sex talk in German, a crippling back injury and coming out to her religious grandmother… I know the recipe for disaster well! A confused Austrian abroad indulges in life with wide-eyed enthusiasm.

What I count as my first comedy gig was at my sister’s piano concert, when I was nine years old: I wanted to be on stage so badly, but I couldn’t play the piano. The teacher felt sorry for me and offered me the option to clean the piano keys in the intermission. I was ecstatic and probably more nervous than all the kids who actually had to play complex classical music. When it was finally time for the intermission, the audience lights were turned on and people started to leave the concert hall to grab a drink: it was my time to come on stage. I proudly walked on, put the piece of cloth on the piano keys and pressed hard to clean them properly. It made weird loud sounds and suddenly the crowd came back: people sat down again and applauded me! I loved it. I lifted the cloth, put it down again and smiled. It didn’t take long until the teacher ran out and told everyone: “She is just cleaning the keys, she is not one of the students!”, people laughed and I had a big smile on my face. I consider this as my first comedy gig, that probably has taught me more about comedy than a lot of other gigs I have had so far.

I have heard that if you punch your chest like a gorilla it relaxes the nerves. So I have done that for a long time. But when I performed at the Fringe Festival the last time, I happened to perform five to seven times a day and ended up with a bruised chest. That’s when I dropped that ritual again. There was another time where I always wore special socks with a skull on them – I wore them when I won my first competition, so I decided it was because of that pair of socks I wore that day. Then I started to wear the socks every time I had a gig. This worked well when I gigged in Austria, because you only gig one time in three months, but when you gig every night you can’t really wear the same socks all the time. They got holes and were stinky so I had to drop that ritual as well. But I am sure, I will find other rituals very soon again 🙂

I got a bad review from someone who doesn’t like female comedians. I can probably top that if I get a homophobe, misogynistic racist in my show, so still waiting for that which will be my worst review ever.

I had a great review at my first Fringe show from Three Weeks, but I think my best review was when a  75 year old man came to me after my solo show, cried and thanked me that I made him laugh so much. He lost his wife a year ago and this was the first night he could laugh again. That was more worth than any newspaper reviews and made me cry as well.

Yes, I will read them. I try to take them professionally as in not getting too excited about neither good nor bad ones. This attitude of course doesn’t work because I will be over the moon if I get a good one and really unhappy if I get a bad one. But in theory I think this is a great attitude.

I was performing for Pride’s got Talent, one judge gave me a really good review and the other one told me: “You offend the gay community.” This obviously irritated me – because I am part of the gay community… It also shows you have one night, and at least two opinions. Bad reveiws/feedback irritates me of course but after sleeping over it, I realised that my jokes can be dark and people take everything personal in a way because obviously everyone sees the world through their eyes. Therefore, my jokes might have come too close to this judge or whatever he had been through and therefore he didn’t like them. Which has nothing to do with my comedy but more with him and his experience. How would you say in English? Reviews are good with a pinch of salt.

Of course, if I perform a set to different audiences and I always die with it I might want to re-consider changing or dropping it. But a single reviewer, a single opinion is just a single opinion and sometimes has nothing to do with your own jokes.

This is a rather difficult question, as it debates freedom of speech and being threatening and grossly offensive. In general, it is important to see the jokes in their context because it is very easy to be misunderstood when certain jokes are taken out of context. A lot of jokes tend to not be politically correct because they use sarcasm, irony, etc. On the other hand, I very strongly think that doing jokes is not an allowance (and should not be treated as such) to threaten or harass people and maliciously and intentionally use the excuse of a joke to offend others.

I am not a big fan of rape jokes and have never come over one that is creative or actually funny. I am also not fond of misogynistic, racist or homophobe jokes. If you do them and make fun about yourself, it is something different but offending other people is personally not my style or taste.

My jokes can be quite dark. Going too far possibly also depends on your audience: Being from Austria, in the UK I do basement jokes – but when I am in Austria, I would not do them because it is too close to our reality there. We had two cases of horrific “basment-stories” within a short time, people are still shocked and can’t really laugh about that, because they are lacking the distance.

My best gig was at a festival – it was the main stage of L-Fest. I was a bit scared because when I went on it was already after 10pm and people were drinking every since they woke up – typical festival vibe. A tent with a few hundred people, ready to rock’n’roll and me. I doubted if comedy (and I) would be the right thing to keep their party vibe up. But it amazing. I came on stage and felt like free falling. They were laughing and clapping, every single joke went well, I got applause in between – I was on a mega hype after that gig.

Find Alice Frick on the web - 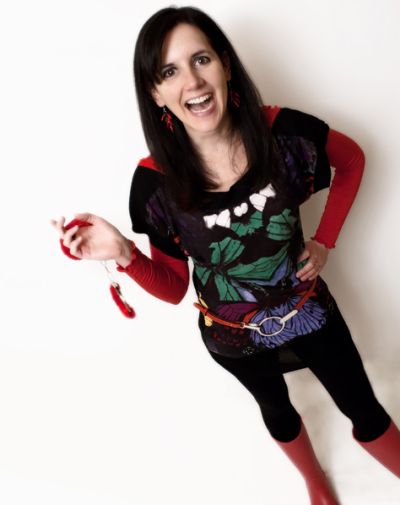 Find Alice Frick on the web -

I think my best review was when a 75 year old man came to me after my solo show, cried and thanked me that I made him laugh so much. He lost his wife a year ago and this was the first night he could laugh again. That was more worth than any newspaper reviews and made me cry as well.