Tell me about your Edinburgh show.
It’s called Worrier Princess and it’s about a lifetime of worrying and looking at the wrong places for reassurances. I got a TV show in Ireland and convinced myself as soon as I had that, I should be happy. I wasn’t and now I’m worried.

Tell me about your first gig.
I was challenged by a stand-up comedian that I worked with in a radio station to write five minutes and perform it in two weeks.
I did a set about the IRA’s love of denim and my granny drinking hot tub water. I fell in love with comedy straight away. The adrenaline rush was amazing, and I’ve been trying to recreate that high for years.

Do you have any rituals before going on stage?
I write key words on my hand as a safety blanket and listen to previous sets and if it’s a really big gig maybe some pop music. I used to take berroca but Aisling Bea told me my liver can’t handle the vitamins. I drank it one last time as I hate waste. I’ll save my liver bashing for alcohol. If you see me with a fizzy vitamin drink slap it out of my hands. It’s my dark vice.

The best reviews are well thought out and quotable, the worst are the ones where they just list out your bits and regurgitate your punchlines as their own. My worst review has my best quote, comparing my stuff to Sharon Horgan and Pheobe Waller Bridge. I’m forever thankful to that man who prefers Ace Ventura pet detective.

No, I’m planning to just watch Love Island instead. It does the same for my self-esteem.

I fear them and try not to think about them.

What a tedious man. If It’s a crime to be unfunny and make a pug impersonate a Nazi? then yes, it’s a criminal offence.

No, just have a sense of empathy and be funny. You can talk about any subject just don’t be a prick.

Yes, when I first started off, the first bit of advice I heard was not to do any paedophile or suicide jokes. So guess what my first joke was about? Gary glitter putting a pencil up his nose and slamming his face on my dining room table. I was a fan of monkey dust at the time and thought I was pushing the boundaries. In reality I was just verbalising a very violent image before doing five minutes on my nan.

It was vicar St January this year. Vicar St is a place I’ve always dreamed of playing since moving to Dublin to pursue a life in comedy. I got to share the stage with my two best friends in comedy in Dublin. Conor O’Toole and Ruth Hunter. The energy was lovely, and my cousin got over excited and heckled me from the back of the room. I’m feeling all warm and fuzzy thinking about it. My family stole my drink backstage though. Cheeky feckers.

Find Alison Spittle on the web - 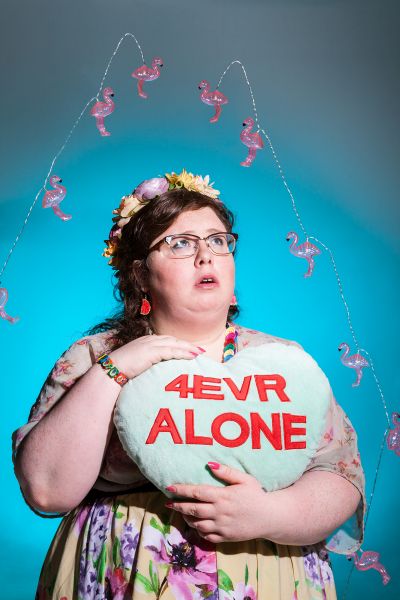 Find Alison Spittle on the web -

The best reviews are well thought out and quotable, the worst are the ones where they just list out your bits and regurgitate your punchlines as their own. My worst review has my best quote, comparing my stuff to Sharon Horgan and Pheobe Waller Bridge.