Yasmin Ali only reviewed four shows at the 2013 Fringe, which made me wonder whether she’s that committed. Her writing skills, while not terrible, are not on a par with most of her peers at The Skinny, so perhaps she’s merely dipping a toe.

If she wants to improve, Ali would do well to avoid statements that say precisely nothing, such as “Like many comics, his humour is an acquired taste” [James Christopher] and “Horse and Louis themselves are perfectly amiable, both as hosts and comperes” (aren’t hosts and comperes more or less the same thing?) When she reviews Gareth Morinan thus:

“You will enjoy this show if:

I didn’t know if she was parodying Gorman-esque slideshow comedy or just being lazy. It didn’t add much to the review, and it didn’t help that her colleague at The Skinny, Simon Pattullo, had already reviewed Morinan two days earlier. Maybe nobody bothers telling Ali what’s going on. Still, at least one thing is cleared up beyond contention: The Skinny DEFINITELY thinks Gareth Morinan is Playing the Numbers Game should get three stars. They’ve hammered that home.

In a nutshell, Ali should only continue writing reviews if:

A. She wants to make a job of it
B. She can give it more than five minutes
C. She can get her workmates to talk to her
D. All of the above”

Yasmin AliWriting for THE SKINNY (Reviewed in 2014) 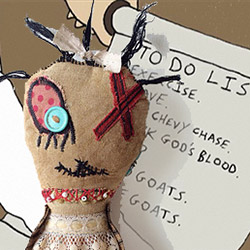