Simon Pattullo is perhaps the most judgmental of the Skinny’s comedy reviewers. A sense of judgment is essential to a reviewer, of course, but Patullo consistently dismisses anything that doesn’t provide him with ‘belly laughs’, regardless of any other charms.

Last year he made me scratch my head by saying of Laura Levites: “If anything, the show may be a few minutes too long to sustain this energy, but that’s not a massive criticism”. Well no, it’s not. In fact it was hardly worth making. “A very funny girl, this is a free show which could set up any fine day at the Fringe” he adds, before giving her three stars to ponder over. Still, he’s called her “a very funny girl” and that’s not at all condescending is it?

There are other odd moments like this in Pattullo’s prose. Sometimes he takes a God-like overview, stating his own opinions as if they’re obvious to everyone. “Any free show can be hit and miss – but you’re almost always guaranteed that little bit [of] extra enthusiasm from the man on stage,” he says, as if all free shows were performed by enthusiastic men. Of John Robins he writes that “Girls would want to date him; boys would want to befriend him”. Would they really? What about the boys who want to date him, Simon? What about them? And why can’t the girls just befriend him, if that’s what they’d rather do? There is something in Pattullo’s syntax that makes me wonder what vantage point he’s writing from. I’m guessing the late Pleistocene.

Other statements just hang in the air as if waiting for some meaning to adhere to them. “A mounted deer head is still on the stage, but a man who spent most of the show inside a cardboard box has, this critic thinks, exited.” Believe me, this sentence doesn’t make any more sense in context.

Pattullo doesn’t commit any serious review crimes, it’s just that his prose reads like it’s written by someone without any self-awareness or empathy. “It’s Jeffortless” he says, to conclude his review of An Evening With Jeff Goldblum – apparently without any shame whatsoever.

Simon PattulloWriting for THE SKINNY (Reviewed in 2014) 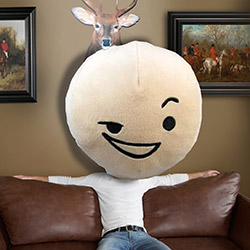