Sam Bradley commits some of the usual sins of the BB coterie, not least frequent slips of grammar and baggy prose. Of the Alternative Comedy Memorial Society he drones “…for the discerning comedy fans mulling over the current crop of comedians populating this year’s Fringe catalogue [continues ad infinitum]”.

At one point Bradley forgets that he’s at a Fringe festival, and berates Faux Latino Pony Show for being too niche. “This narrowly-aimed comedy will inevitably hamper its ability to appeal to wider audiences,” he opines, as if getting on Live at the Apollo is the direct ambition of every one of 2014’s 900 comedy shows.

Apart from the odd depressing utterance, Bradley isn’t too bad most of the time. I mean, he isn’t GOOD, but this is Broadway Baby we’re talking about, so sod it; we’ll give him leeway. At least he worked out that FLPS was SUPPOSED to be a celebration of bad performance rather than just a bad performance (not every reviewer did). And at least he seems to heartily enjoy 75 per cent of what he sees. “It’s not often that a show at the Fringe combines Irish dancing, tampon jokes and coming-of-age stories,” he says (it probably IS quite often. It’s the Fringe, after all.)

His description of Aidan Goatley’s 10 Films With My Dad was so heartwarmingly enthusiastic I wished I had seen it. In fact, I was just starting to like Bradley when he made this statement, which I will repeat in all its bombastic arrogance:

“Part of the duty of a Fringe reviewer is to tell the entire world when they’ve found the worst act in the festival, so that the rest of the public can avoid it and save themselves. Well, world, here it is, the bottom of the festival. I have planted the Broadway Baby flag into its desolate ground and claimed it for the empire, and I’ll be damned if anyone else takes the credit for my discovery.” Oh my pissing aunt, get over yourself, Bradley. And don’t deride others’ attempts at comedy in passages that are themselves a sneering, desperate sort of wannabe-comedia.

But for what it’s worth, world, here it is! I’ve found the most up-his-arse reviewer of the 2013 Fringe, and I’ve claimed him for the Republic! I have planted the Fringepig flag in his desolate ground and pissed all around his… oh fuck it. I’m boring myself now. 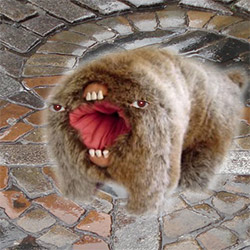