Rory Morgan doesn’t do a bad job of reviewing. He says what he sees and sums up his impressions in a solid, workmanlike manner. He makes good use of his publication’s word limit, and doesn’t waste too much space going off on vapid tangents.

It’s a shame then that Morgan relies so heavily on professional cliché and stock statements to pin his reviews together: things like “Truly this is a comedian who will have the Marmite effect on fringe goers” and “whether you like it or not you can’t say it’s boring”. He also repeats himself a little, writing in several reviews that an act’s material “does not match up” to their enthusiasm / persona. This isn’t to say that the observation is ever invalid, and there’s no evidence that Morgan is anything but fair.

If something’s truly unique, it deserves a proper description, and you sense that Morgan either doesn’t have the skill or the time. Hopefully it’s the later.

Another 20 minutes before hitting ‘send’ could do miracles for this reviewer. 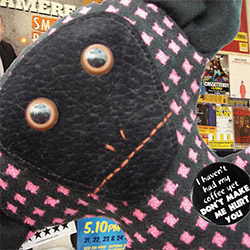