I’m not sure I believe anything that Rory Mackenzie writes. Not because I think he’s lying, but because I’m not convinced he knows what he’s looking at. His reviews seem to be rooted in the soil of deep ignorance, fertilised by sublimated pain and anxiety. Reading one of his reviews is like trying to get a traumatised victim to testify in court.

He has never heard of Jarred Christmas, for example – dismissing him as someone who “clearly [finds] the writing of actual jokes too difficult”. He makes no allowance for Christmas’s show, Do We Need You After the Apocalypse, being a late-night drunken experiment and not his usual carefully-constructed thing. Nobody expects a reviewer to kowtow to a recognised name, of course, but it helps the credibility of the piece if they have at least heard of a comic who has been on the scene for almost two decades.

However, Mackenzie is party to some esoteric knowledge. He knows all about pavlova jokes. They make him angry. Reviewing Javier Jarquin he writes “He even brought up the one thing that no New Zealand comic should ever. Ever. And that is pavlova. We’ve heard it before and it wasn’t funny then. It’s even less funny now.” Really? We’ve all heard that? I’ve NEVER heard a joke about pavlova. What he fuck is pavlova? OK, Rory, I’ve looked it up and it turns out it’s just a fucking cake, Rory.

Odd. But then so is the statement “Jarquin looked nervously at his audience, as if their presence was pure effrontery designed with the specific intent of putting him off his act”. Rory, sweetheart… are you, perhaps, reading a little too much into this? Has someone in the past, possibly from New Zealand, hurt you, Rory? Has someone touched you in a wrong way down at the Rangitoto Island Scenic Reserve?

Thankfully it all becomes clear at the end, when Jarquin touches on the subject of ADHD: “Wonderful, here is yet another man with a microphone offering his medical opinion on a topic he knows nothing about… It was such a crass bit of stand-up that”… (continues interminably). The best advice we can give Rory is to tell him that everyone has suffered, and that if he wants to review comedy, he is going to hear some things that touch on his own personal grief, and that he must strive to keep his feelings out of his reviews.

Of course, I’d like to tell Rory that but he’s probably forgotten to take his pills and won’t pay any attention to what I’m saying. Ha! You see what it’s like, Rory? Crass, wasn’t it? Feel the crassness, Rory. Breathe in the crassness. That’s comedy, Rory. In fact it’s not just comedy. It’s THE WORLD. Deal with it. 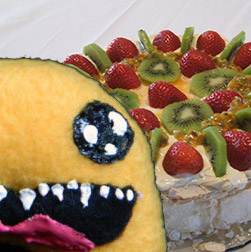