Hawkins is a great fan of the words ‘hackneyed’, ‘indulgent’, ‘boring’ and the phrases ‘goes on too long’ and ‘this is hardly new’. Do people not realise that he has somewhere important to be, like another show he can’t be arsed to sit through?

His prose is noisy with the sound of eyeballs being rolled and air being expelled, and he seems to perennially ask why comedians can’t follow the simple rules, like he would, if he was one. “Second show syndrome strikes again,” he sighs, dismissing Jim Campbell as Not As Good As He Used To Be (last year). Of Henry Paker he groans: “This show reeks of a man trying to trudge down the over-trodden observational path to wider success, while neglecting his own undeniable talents. A classic error.” Question: Is it possible to ‘reek’ of ‘trudging’ down an overtrodden path? No, but Hawkins will always reach for a word with an onomatopoeic chime if he can; thus things resonate with trudgings and reekings and snipings and sneerings, and bits where he gets “flummoxed”, as if he’s being penetrated by the spirit of Lewis Carroll. Or a Jabberwocky.

He mostly groans like an exasperated headmistress through his negative reviews; only Liam Mullone managed to bring him to a state of full spleen-venting, Hawkins accusing the comic of ranting “like a lunatic in a library” at Henning Wehn and Robin Ince; seemingly incandescent that someone he dislikes so much should dare invoke the names of his betters.

His style lifts when he actually likes something: his review of Adam Buxton rightly celebrates the comic’s silliness in three concise paragraphs, and every now and again he spins off a sentence that chimes beautifully: “Contentedness is rarely conducive to cutting-edge comedy,” he states. It might not be true, but it’s a lovely bit of alliteration.

Hawkins’ tendency for nostril-snorting makes him singularly unsuitable for the have-a-go-at-stand-up piece he wrote for the London Comedy Guide, in this case a particularly self-indulgent account of that overworn space-filler. It will surprise no-one that Hawkins purports to discover a fresh respect for the vocation while in fact meaning to prove that anyone can do it. He keeps asking himself “What’s the worst that can happen?” Well, there could be some grumpy cunt watching you, Hawkins. That’s all.

Si HawkinsWriting for FEST (Reviewed in 2014) 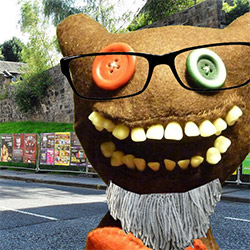