It’s called clownfish. it s meant to be a series of clown sketches. in the end we’ll all kill each other- I’m joking. It’ll be ten in the night and in Edinburgh I think no one has a mind left at that time- so it’s kinda slapstick and silly and rough. and it s not ready. how funny!

So, I did a gig as part of a comedy course- and that was in angel in a pub. I felt great when I was doing it. did this thing where I put a hula-hoop cracker in my finger- then made it disappear with my lips- and then found it again! I was so happy doing that!

I shit myself! 🙂 can u say that? but I do it on stage! noo. enough coarse humour!! so I do everything wrong: I watch all other acts- which means I’m drained and I really don’t feel like doing any comedy when my turn comes. that s if I’m late in the bill. if I’m early- I’m usually light and airy- and happy I’m getting it over with. so, I can then sit and enjoy the gig.

I haven’t had any reviews! I mean – I don’t think anyone has ever written about me!

Verbally – there was a guy at a gig in LA – he was very British and very well spoken and he said to me he’s a director of a theatre – can’t remember – in London- and that everything I did was great – the tone – the style – the jokes-. I was pretty happy. and the worst review: it was not a review – it was a reaction – I said a joke to two friends that asked me to ‘’make them laugh’’ – so the one laughed a lot and the other one shocked and angry went: that s not funny!!

Yes. I plan to read reviews and wipe my ass with them. It’s a yoga joke. You really shouldn’t get attached to the fruits of your actions. I mean it’s endlessly satisfying to make people laugh – but is that why your doin’ it? Don’t u wanna make yourself laugh sometimes?

I think I’m a pretty good reviewer. I just keep them to myself. I have nothing good to say- almost always. I mean there are genius acts and moments I really enjoy, and I usually tell the people what I like-when it’s true. but I guess u can experience a moment being in your head- or just being there. not sure what reviewers do for living- but I mean- I read reviews of books and shows that I vet seen and I’m like- really- that blew your mind? that s the funniest book u read? that s the comedian of the year? don’t know. when they r overtly positive I feel reassured about ‘’the mainstream is shit’’. when they are negative- I guess I don’t read any negative reviews. or enough. it s sad obviously when a reviewer says something negative for the artist isn’t it. but it s all a matter of perspective.

Hmm. so, what did the dog do? these dogs can t breath. that s bad enough. who said that: Jews? do not cross them. I generally don’t go out of my way to offend people- but I also don’t monitor myself when it comes to who I offend. I mean really- u can’t censor your truth. if that s what the artist wants to do- my theory is- if u thought it- share it. I have an off limits kinda approach when it comes to art. I made a joke once and I introduced it like that: I said- I wanna make a bad joke- but I don’t want to go to prison. I guess in the name of free speech and comedian’s intention to make people laugh- jail time should not be an option.

Yes. all the time. it’s why I do it. where is the line? I mean it’s funny not to laugh out loud but consider it later-. my jokes are the jokes of tomorrow 🙂

Find Maria Tea on the web - 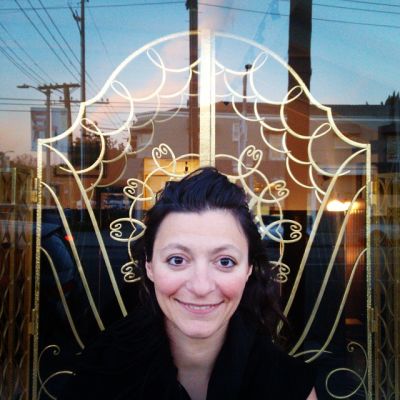 Find Maria Tea on the web -

Yes. I plan to read reviews and wipe my ass with them. it s a yoga joke. You really shouldn’t get attached to the fruits of your actions.