Robert Stevens’ reviews are like Volvos. Solid little review Volvos, chugging through the Fringe with their 120 words of reasonable, proof-read, quite-well-informed blah.

He’s SO reasonable that sometimes the most cutting comments almost slip away unnoticed. He’s a bit of a mailed-fist-in-a-velvet-glove merchant: “David Elms’ low-level subtlety is a delight to watch,” he says – at which Mr Elms probably got his hopes up. “His stand-up is often so mundane that it breaks past the barrier of observational comedy into the detached realm of the absurd.” Hmm. Of Chris Stokes he says “Instead of the quiet intensity that introverts usually exemplify, Stokes simply comes off as quiet”. And Pierre Novelie nearly got away with it until Stevens says: “He’s certainly a comedian to watch, but unfortunately not quite yet”.

None of this is criticism of Stevens, of course. In fact it’s quite impressive how his feelings run into one another rather than the usual signposting of what the reviewer does and doesn’t like. His reviews are considered and mostly useful to the act. When he decides to swing into quirky he does at least save it until the end: “[James] Acaster’s career has followed the three act structure of ‘Macbeth’. Catch him before he goes mad”.

Stevens is one of those relatively few Three Weeks reviewers who can make every word of the 120-or-so limit really say something. Stevens does not, perhaps, write the most enthralling reviews, but these beige little boxes of text are reliable and safe. Ah, see what I just did? I did a compliminsult, a bit like Robert Stevens. 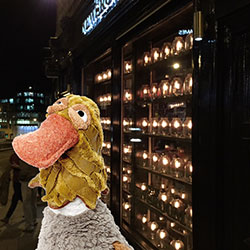