Don’t Be Terrible is a two-hander dark comedy which asks, ‘can stand up save your love life?’ I play Alice, a stand-up comedian, who tries to give Steve (played by Oliver) a crash course in how to do comedy – his motivation being a last ditch attempt to save his relationship, as his girlfriend keeps talking about the ‘funny guy,’ at work. He thinks if he does a gig in front of her she will fall in love with him all over again. Or at least think he is hilarious. Obviously, things do not go to plan.

My first gig was an hour-long power point presentation about my dad and Star Trek, because I am bad at doing things in a logical order. It went well, probably because it was in front of all my forgiving family and friends, and then I did the Ed fringe for two weeks and it was a bit of a shock to the system. Since then I have been slowly but surely learning how to do things in a normal way.

I listen to Mike Birbiglia, because he is my favourite comedian, and his relaxed natural delivery is very soothing and reminds me to chill out on stage.

I had a review for my last show, where the guy writing it said it was oversharing to the point of making the audience feel uncomfortable, which to me was part of the point of the show (and I thought I had balanced it out with some good old cathartic chuckles.) He said I was a better writer than performer, which was kind of a backhanded and painful compliment/insult. Also probably true for that show. The best review was probably one that never got written by someone who told me afterwards how much they loved my show, who worked for a very very good publication, and then never wrote anything on it. How I mourn that review every day.

I will try and avoid reviews, and then get drunk and read them.

I think your opinion on them changes depending on what they say about you! Sort of like how you are waiting for a text from a guy you are seeing, and you are like ‘whatever, I don’t care, he smelt weird.’ And then you get the text and it’s a good text and your like ‘I think I love him.’ That old chestnut. But with reviewers, It’s nice when they get it.

I feel like it’s a difficult and nuanced subject, which I am not overtly qualified to comment on in a way which could do it justice. Cop out. Sure.

I think that there are some people who are not skilled, versatile or experienced enough to be able to make certain subjects funny in a way, which says anything interesting, meaningful, or new on the subject. It’s how things are handled. I have seen the same two comedians do Louis CK bits on the same bill, and one was funny, smart and respectful, with an interesting intelligent take, and the other made his victims the butt of the joke and it just felt super lazy, if nothing else.

I don’t think so – I am not very edgy, at least I don’t think I am. I do say some things on stage which have made people feel uncomfortable (like that reviewer), but never in a way that feels for the sake of it, or for creating a weird pity party. It has all been thematic relevant, and I have been careful to structure all the highs and lows and laughs in the appropriate order in which to make the audience feel the tension and then of course have it broken with a well-timed dick joke.

I started out doing comedy story telling stuff, so have only been doing stand-up ‘proper’ for 14 months, so hopefully I have more to come but recently I did a gig in London Bridge with a lot of comedians I absolutely admire and had seen on stage a few months prior, and I guess I felt like I had reached a level where I was beginning to take myself seriously! Also, I did a gig in Bristol where an audience member gave me my first and only standing ovation and told me how she had been going through a really hard time and my show had really helped her, and we hugged. That was nice.

Find Ellen Waddell on the web - 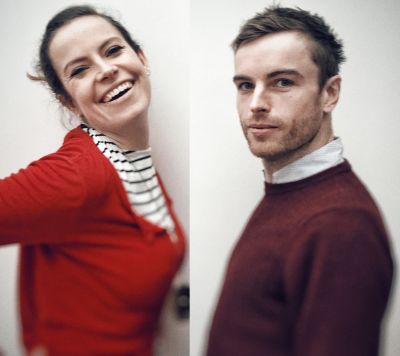 Find Ellen Waddell on the web -

I will try and avoid reviews, and then get drunk and read them.