I think it’s loosely me trying to be a good man but not really knowing what ‘good’ or ‘man’ means anymore, and making fun of the UK because I moved here from Australia this year so I’m allowed to. The title comes from my girlfriend pointing out I breathe through my mouth, which is something associated with being a dummy, so that was nice of her.

It was at university, I went up holding a notebook because I thought that was a cool move and actually did really well. I wasn’t good at comedy but the room was packed with my friends so they were excited by the whole spectacle which turned into laughter somehow. As I’ve gotten less rubbish over time they’ve obviously stopped coming because seeing your friends succeed is the worst.

I used to smoke 2-3 cigarettes but I quit so now I just think how much I’d like to smoke 2-3 cigarettes, and how I could probably scab a cigarette if I tried, but then it’s time to start and I just walk on. I also try to listen to my last set at some point during the day, and occasionally catch myself laughing at my own joke.

The best still has to be last year in NYC, this grizzled dude who worked for the club I was playing walks past me after I closed the show, pats me on the back says ‘Funny shit, kid’ in this really thick New York accent and walks off into the night.

Worst would probably be my first solo show back in Sydney, the lady just said it wasn’t particularly interesting, well-worn middle-class boy maturity rubbish and she was absolutely right. Also I read it in print which left out the only nice stuff about showing potential etc. My friend hung it above his fireplace to prank me but I didn’t come over for like 5 months so pretty much everyone in Sydney saw it – which is why I had to move to London.

This is the first year I’m going to try and get reviewed because I’ve just discovered stars are some kind of weird comedy currency, so I guess the least I can do is read them? I won’t tell anyone I read them though because I didn’t get into live comedy for the feedback.

No, because it’s a dog. I’ve always found dogs pretty intuitive but I don’t think they can really grasp xenophobia. I mean it’s almost mocking Nazis if you can teach a dog their big trick – if you taught a parrot to say the n-word I think that’s a different story, unless the parrot is black, and you’re black too obviously … then it’s fine I guess? I’m a straight, white guy, I don’t write the rules on this stuff.

No, there’s a couple I don’t have any jokes about because I can’t make them funny – or maybe they’re not funny coming from me. Don’t blame the topic, blame the comedian.

Too far makes it seem like there’s no coming back, which would suggest I’ve been in the papers or been blacklisted or something. I actually walked a couple when I was recording my special last year, right from the front row, the lady yelled ‘NICE FUCKING JOKE’ right as she left which was a relief as I was worried she wasn’t enjoying the show. It was a very tame joke about gentrification, must’ve hit a bit close to home.

I got to do The Knitting Factory last time I was in New York. It’s a great room that Hannibal Buress started back in the day, and before I properly got into comedy I was visiting my girlfriend who lived right nearby and we’d go every Sunday. I saw all these great American acts for the first time like Michael Che and Mark Normand, and Aziz Ansari did a drop in 30 of new gear… it’s a free show, and the quality is insane. So yeah, last time I was in town I got to actually do it and I didn’t bomb. It was very cool.

Find Daniel Muggleton on the web - 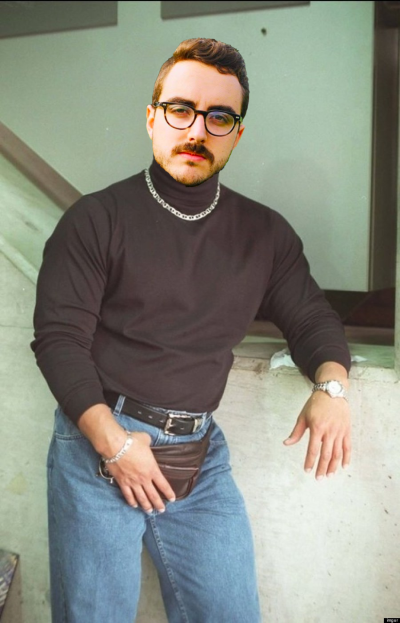 Find Daniel Muggleton on the web -